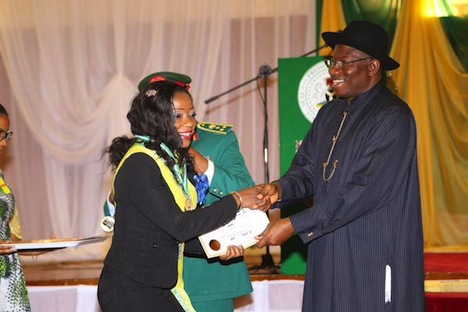 The Federal Government, on Monday, granted automatic employment and Post-Graduate Scholarship to 164 ex- National Youth Service Corps members, who distinguished themselves during their respective service year.

President Goodluck Jonathan, who announced the awards at a ceremony at the State House Banquet Hall in Abuja, said the gesture was to encourage the youth to do more for national development.

“Once again, I congratulate all awardees on a well-merited recognition and honour.

“The entire nation salutes the determination, courage, discipline, commitment and hard work, which you all exhibited during the service period.

“In line with our policy of encouraging our youths to always strive for excellence including serving and prospecting corps members, I hereby announce the immediate employment of the award winners.

“I know some of your state governors, Akpabio and others have employed some of you, but the remaining ones, we will absorb in the Federal Civil Service.

“Also for some of you who may want to continue with your studies, you have automatic scholarship for your post-graduate studies.”

He said that the conferment of the President’s NYSC Honours Award on the ex-corps members, “is an important moment in youth motivation”.

“It is designed to highlight and promote the creative and innovative contributions of our youths, focused towards building a strong, virile, vibrant, united and prosperous Nigeria.”

He said that there was no doubt that since its inception more than 41 years ago, the NYSC Scheme had continued to play a significant role in actualising the quest for a united nation.

According to him, the scheme is also adding to the vital manpower requirements in the education, health, infrastructure development, entrepreneurship and critical skills sectors.

Jonathan said that the giant strides recorded by the scheme through its Community Development Projects, had greatly contributed to the improved the living standards of rural dwellers.

He urged state and local governments to support the scheme especially its programmes on community and rural development with special emphasis on agriculture.

He reiterated his administration’s faith and confidence in the ability of corps members and youths of the nation to sustain the unity and indivisibility of the country.

He said, “You must at all times work conscientiously and tirelessly for the cohesion of our country by regarding your compatriots as brothers with whom you share a common stake in progress and well-being.”

Jonathan said the scheme’s collaboration with the Office of the Senior Special Assistant to the President on Millennium Development Goals for the implementation of the War Against Poverty had enabled more than 300,000 corps members to acquire skills and follow-up loans they could use to establish agro-based businesses.

The President also applauded the NYSC, Federal Ministry of Agriculture and Rural Development and the International Institute for Tropical Agriculture (IITA) for working closely to create platforms that would enable Nigerian youths to become self-reliant through agriculture.

He, therefore, urged the NYSC to ensure that its efforts to establish the Integrated Farm Settlement Scheme nationwide yielded positive results without further delay.

He expressed appreciation to NYSC for organising the awards ceremony, saying that it was belated.

Jonathan, however, urged the stakeholders to hold the event at the end of each service year, saying that his administration would no longer accept a delay in organising the awards ceremony.

Earlier, the Director-General of NYSC, Brig.-Gen. Johnson Olawumi, said the award was one of the major mechanisms of the scheme for identifying, projecting and rewarding corps members, who went the extra mile to exhibit exemplary service.

Olawunmi said the NYSC-HAP programme was to support corps members, who suffered various forms of physical incapacitation due to accidents in the course of their service year to enable them carter for themselves.
He said the award recorded a major breakthrough as automatic jobs were given to 30 awardees by Heritage Bank.

The bank donated N1.5 million to each of the nine NYSC-HAP beneficiaries.