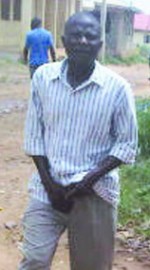 A 48-year old native doctor has been arrested and charged before Ejigbo Magistrate’s court for allegedly defrauding a 70-year old jilted woman.

The woman, Grace Dinah, had contacted the native doctor to prepare her love potion that will enable her win back her husband after years of separation in Lagos State, western Nigeria.

The Osun State-born Akin Babalola allegedly collected N500,000 from Grace under false presence of preparing the love potion for her.

Instead of Babalola keeping his own part of the bargain, he allegedly duped the septuagenarian, claiming he could not prepare such medicine which might cause the death of her estranged husband.

Though Dinah denied that he asked Babalola to prepare love potion for her, saying she was merely duped, a police source said there was suspicion about a failed transaction between them.

P.M.NEWS gathered from Dinah that her husband dumped her and her children and married another woman some years ago, leaving only her to raise the children.

She said the strange woman her husband married made him not to remember her own children.

On his part, Babalola told our reporter that he specialises in preparing love medicine and solve other spiritual problems and most of his clients are those who have broken homes and marriages which he uses his spiritual powers to restore back.

Trouble started after Dinah asked Babalola to refund her money since he did not fulfill their agreement. He refused to refund the N500,000, threatening to expose her if she asked for the money again.

She went to Igando Police Division and reported that Babalola defrauded her under false pretence.

Babalola was arrested and taken to the station where he told the police that he collected the money and did not continue with their initial agreement because it involved human life.

The police charged Babalola to court on a three-count charge of felony, obtaining under false pretence and stealing under the Criminal Code.

He pleaded not guilty and the presiding Magistrate, Mrs. M.B. Folami granted him bail in the sum of N200,000 with two sureties in like sum.

He was remanded in prison custody pending when he will fulfill the bail conditions.