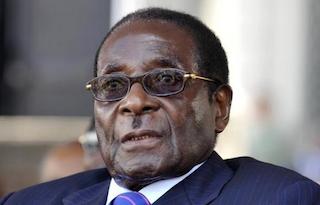 Zimbabwean President, Robert Mugabe, has alleged that his former Vice President and other top officials in his ruling Zanu-PF sought the services of Nigerian witchdoctors in a bid to kill him.

The Africa Review reports that President Mugabe made the bizarre claims at the weekend as he celebrated his 91st birthday at a lavish party hosted by the party’s communist-styled 21st February movement.

The veteran ruler, in power since Zimbabwe’s independence in 1980, claims he was ordained by God to rule forever, according the report.

He told party supporters at the celebrations held at a top hotel in the resort town of Victoria Falls that sacked Vice-President Joice Mujuru used two Nigerian witchdoctors in her alleged plot to have him killed.

Ms Mujuru was sacked together with more than 10 Cabinet ministers for allegedly plotting to assassinate President Mugabe and being involved in corrupt activities.

The former VP has repeatedly denied the allegations and some of the ministers were preparing a court application to challenge their expulsion from Zanu-PF.

President Mugabe said Ms Mujuru was now too desperate to push him out of power even after he won an election in 2013.

“We managed to know what (Ms) Mujuru was doing at her house, even consulting witchdoctors,” he claimed.

He said the Nigerians ordered Ms Mujuru to buy chickens that were named after herself, the President, his wife and Vice-President Emmerson Mnangagwa.

The President claimed the former Vice-President who was his deputy for 10 years, performed the rituals naked.

“Where do these Nigerians get the powers to entrap the soul of a human being into a chicken or sheep and then kill him?

“God is for us all. I also go to church, I do not believe in superstition. We were taught God’s teachings.”

Despite claims made since October last year that Ms Mujuru plotted to kill President Mugabe, she has not been charged with any crime.

President Mugabe has repeatedly threatened that the sacked government officials would be sent to jail for alleged corruption, but no action has been taken up to now.

The Nigerian government at the time said it had lodged ‘the strongest protest’ against the veteran ruler’s statements.