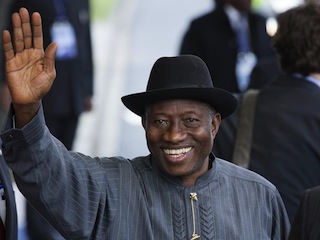 Justice Abubakar Yahaya, who delivered the unanimous judgment of the five-man Panel, held that Jonathan was qualified to seek for another term of office.

He said that the president was qualified because he did not participate in the two previous elections.

The court, therefore, held that the appeal lacks merit, dismissed it and awarded a N50, 000 against the appellant.

According to the court, the suit is also speculative and imaginary.

Yahaya held that Jonathan was eligible to stand for 2015 presidential election for his second tenure of office as constitutionally stipulated.

He also held that the oath of office taken by Jonathan on May 6, 2010 was to complete the tenure of late President Umaru Yar’Adua.

Jonathan’s taking of the oath of office on May 6, 2010, the appellate court held, “was not on account of election as constitutionally stipulated but by operations of the constitution”.

The court held that Jonathan’s participation in the 2007 election was as vice-presidential and the oath he took on May 29, 2007 was for the office of vice-president.

Yahaya further held that the late Yar Adua took oath of the president.

He held that “for anybody to be said to have been in office of president for two terms in line with the provisions of Section 135, he must have been nominated by a political party twice.

“He must have stood and won elections twice and taken the oath of office in the capacity of the president twice.

“On May 6, 2010 when he took oath office to complete the tenure of his late boss, there was no nomination by any political party, no voting by Nigerians but got to the office on the operations of the constitution.”

NAN recalls that Njoku, a PDP chieftain, had instituted the suit before an FCT High Court seeking to declare Jonathan ineligible to seek another term in office.

This, he argued, was on account of the president having already taken the oath of office for the same office in 2010 and 2011.

The suit was, however, dismissed by Justice Mubashiru Oniyangi of the FCT High Court.

Not satisfied with Oniyangi’s judgment, Njoku on April 16, 2013, approached the Court of Appeal to set aside the judgment.