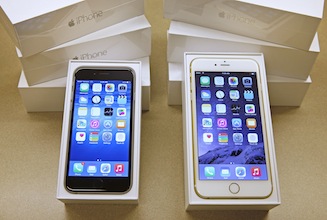 The survey by Gartner found Apple grabbed a 20.4 per cent share of smartphone sales to end users, boosted by the introduction of its large-screen iPhones. The California giant sold some 74.8 million handsets, the survey found.

South Korea’s Samsung meanwhile saw its share tumble to 19.9 per cent, as its smartphone sales dropped to 73 million units.

Other surveys showed Apple and Samsung in a virtual tie, but Gartner showed a clear lead for the US firm.

“Samsung continues to struggle to control its falling smartphone share, which was at its highest in the third quarter of 2013. This downward trend shows that Samsung’s share of profitable premium smartphone users has come under significant pressure,” said Gartner analyst Anshul Gupta.

Cozza added that Samsung needs “a solid ecosystem of apps, content and services unique to Samsung devices” to gain loyalty and make inroads in the higher end.

Samsung this week unveiled its new Galaxy S6, its flagship device aimed at competing with the iPhone 6, as well as a new S6 Edge “phablet” which takes aim at the iPhone 6 Plus.

China’s Lenovo — which acquired US-based Motorola last year — was the third largest vendor both in the fourth quarter and the full year, with fellow Chinese maker Huawei in fourth place.

China’s Xioami grabbed the number five spot in the final three months of the year, but South Korea’s LG held that position for full-year sales.