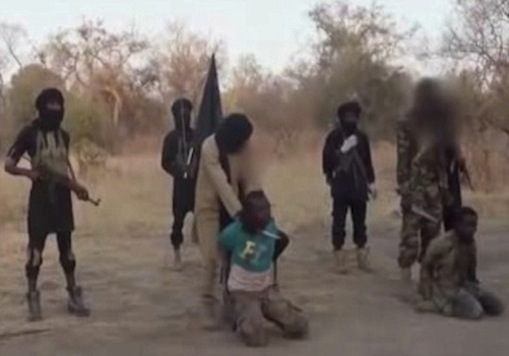 The Mail Online has published a new video by Boko Haram purporting to show the executions of two alleged spies.

In the video, one of the men is made to make a full confession, explaining his ‘crimes’ to the camera, before the pair are beheaded and their bodies shown to the camera.

The gruesome execution video echoes those posted by Islamic State and is the second released by Boko Haram.

The video, called ‘Harvest of Spies’, was posted Monday on Twitter by Boko Haram, the SITE intelligence group said today.

It starts by showing a man kneeling in the foreground with a group of Boko Haram fighters approaching him holding a flag used by militant Islamist groups.

In a theatrical display previously seen in the execution videos released by ISIS, the men line up behind the victim.

The video then cuts to show two men, identified as Dawoud Muhammad and Muhammad Awlu, led by Boko Haram fighters before being made to kneel.

One Boko Haram fighter, whose face has been blurred by the militant group, stands behind Dawoud Muhammad, holding a large knife.

Mr Muhammad tells the camera that he is a farmer from Baga, northern Nigeria, and is then made to answer a series of questions at knifepoint.

Mr Muhammad reveals that hat he had been approached by a police officer who offered him money in exchange for infiltrating Boko Haram.

Mr Muhammad is made to confess that their mission has been to spy on the ‘residents who live here’ i.e. Boko Haram, and in exchange for spying, the police officers had promised him that he would ‘become rich and will never go back to be a farmer again’.

The camera pans from left to right in slow motion, showing Mr Muhammad and Mr Awlu on their knees as they are executed by Boko Haram fighters.

The video fades before the actual beheadings take place, and then shows the two men’s bodies with their heads placed upon their chests.

The video does not reveal how the spies were caught by the militants and MailOnline has yet to confirm its authenticity.

Boko Haram previously published only one beheading, of a Nigerian fighter pilot whose plane went missing in September.

Mr Muhammad’s home town of Baga, was the site of a series of mass killings carried out by Boko Haram in January this year which is believed to have resulted in 2,000 deaths and saw more than 14,000 people flee the city.