Angelique Kidjo To Perform at Etisalat Prize For Literature 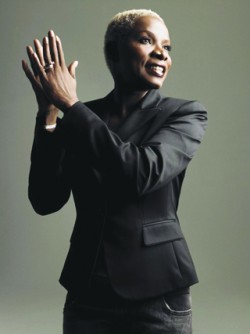 Just as Nigerian writer, Chinelo Okparanta, author of Happiness, has been shortlisted alongside two other finalists for the 2014 Etisalat Prize for Literature holding Sunday, 15 March in Lagos, Benin Republic international singer and two time Grammy Award winner, Angelique Kidjo, has been announced as the guest performer at the literary evening.

Chinelo will compete for this year’s award with two South Africans -Songeziwe Mahlangu, author of Penumbra, Like Water and Nadia Davids, author of An Imperfect Blessing. And the winner will be announced at a black tie grand finale on Sunday holding at the prestigious Intercontinental Hotel.

The event is expected to feature the who-is-who in African art, literature and entertainment, as well as performances from the Nigerian Idol Season 4 winner, Evelle.

This is the second edition of the award which was created by Etisalat Nigeria in 2013 to celebrate young, first-time African writers of published fiction books and to promote the reading culture in Africa.

“The Etisalat Prize for Literature is the first ever pan-African prize celebrating such first-time African writers of fiction. The prize aims to serve as a platform for the discovery of new creative African talent and to support the literary industry on the continent,” the organisers said in a statement.

The winner will be awarded a cash prize of £15,000 and a high-end device, in addition to a book tour to three African cities. The winning writer will also go for the Etisalat Fellowship at the University of East Anglia, which will afford the writer an opportunity to network with other writers and publishers to work on a second book.

The two runners-up will also win a book tour and Etisalat will purchase 1,000 copies of all three books for distribution across the continent.

NoViolet Bulawayo, author of We Need New Names, which won the inaugural edition of the Etisalat Prize for Literature, expressed her delight at the opportunities opened to her after winning the award.

The Zimbabwean, who is now a Stegner Fellow at Stanford University remarked: “I am thankful to the organisers of this event, Etisalat Nigeria, for this most excellent and necessary prize. We are all aware of the shortage of literary prizes and it is heart-warming to know that Etisalat Nigeria sees and values the significance of such literary works in Africa,” she said.