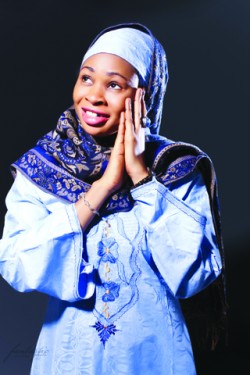 A popular Islamic choral singer, Alhaja Hazzanat Kolawole Yakub a.k.a. Ikunle Abiyamo, has said that her ambition is to meet and have a duet with popular Fuji music star, Wasiu Alabi Pasuma.

In an interview with P.M.NEWS Entertainment Café, Hazzanat, who is currently working on her second album, said that recording a duet with Pasuma has been her age-long ambition because the Fuji star is a bunch of talent and judging from the numerous duet albums he has featured, she discovered that he is an artiste to be reckoned with.

“If you want the best go for the best,” she declared.

The talented singer, whose first album Ikunle Abiyamo was released on Thunderbolt Vision Records, said she is currently in the studio for the second album which will feature @40, Awoko and two other top stars.

Hazzanat studied Computer Science at the Lagos State University, LASU, Ojo. She started as a lead vocalist with the Akirunfayo Arabic School, Fadeyi, Lagos, and later joined Alhaji Ayeloyun’s Group. She later went solo in 2014 and released her debut album.

Hazzanat’s brand of music is Islamic fast tempo beat with a touch of highlife music.

She said that her style of dressing is unique because it is pure Arabian style.