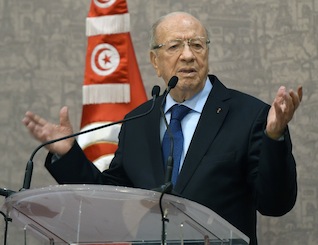 Tunisian authorities arrested a popular comedian and a television show host Friday for offending President Beji Caid Essebsi, whose office promptly denied it had anything to do with the case.

The two “committed an offence against the head of state, a fraud,” by inappropriately representing themselves as someone else, and will remain behind bars until they appear in court on March 25.

“We will not enter into the details of the case” so as not to undermine the investigation, Sliti said.

But private Mosaique FM radio, where Migalo works as a comedian and impersonator, said he had recently pretended to be the president in a telephone call he made to a businessman.

According to the broadcaster, the businessman, who was not named, had recently asked Ben Gharbia to intercede on his behalf with the president but did not say what it was about.

It was not immediately clear what the businessman was supposedly seeking or what Migalo allegedly said to him.

Ben Gharbia was formerly a star host with private television Ettounsiya who has been planning to launch his own television channel.

Mosaique FM urged authorities to free Migalo, vowing to “spare no effort to defend him” if his arrest was linked directly or indirectly to his job as a satirical performer.

Essebsi, 88, is a veteran of politics who served as interior minister under the country’s founder and as parliament chief under ousted dictator Zine El Abidine Ben Ali.

He won Tunisia’s first free presidential election in December, capping off the transition to democracy in the birthplace of the Arab Spring.

As part of that transition, Tunisia adopted a new constitution last year that guarantees the right to freedom of conscience and expression.

In denying involvement in the case, a statement from Essebsi’s office said “freedom of the press and expression are acquisitions the president… is committed to defending, he being its principal guarantor.”

An offence against the president is punishable by three years in prison, misrepresentation of identities by two years and fraud by five years.

Human rights lawyer Ghazi Mrabet criticised the political class for not having done away with what he called repressive elements of the penal code, which he insisted should have been superceded by the revolution against Ben Ali.

And Amna Guellali, representative in Tunisia of Human Rights Watch (HRW), said the law should be amended to deal only with “extreme, or very serious, cases.”

The arrests came days after a military appeals court jailed blogger Yassine Ayari for six months for defaming the army, despite criticism from rights groups.

Ayari claims he is being punished for blogs he wrote while out of the country that were critical of Essebsi’s anti-Islamist Nidaa Tounes party.