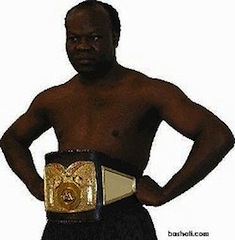 P.M.NEWS Sports can report that World Boxing Federation, WBF cruiserweight champion, Nigerian Bashiru Lawrence Ali, OON, who had since last month been remanded at Kuje Prison in Abuja has turned into a boxing trainer, taking suspects on the rudiments of the trade within prison.

Bash Ali has been having a running battle with the Managing Director of NEXIM Bank, Robert Orya and he was taken to a Wuse Zone 6 Senior Magistrates’ Court in Abuja over a six-count charge of joint act of abetment, criminal trespass, and obstruction in public way at NEXCIM Bank headquarters.

He was granted bail on two occasions by the court on 19 February and 4 March, but the Edo State-born boxer told the court and his lawyer, Mr. Agbonlahor Anthony that he preferred to stay in Kuje Prison till the next hearing, 2 April.

The boxer had stated that NEXIM Bank’s MD had disobeyed the order of President Goodluck Jonathan that the bank should provide the sum of $30 million for his Guinness Book of World Record fight,but that Orya allegedly demanded a bribe from him. He said he wants to use his stay at the prison to protest the corruption at NEXIM Bank.

It was gathered that since Bash Ali has been in the prison he has been using his time to train some suspects held for being Boko Haram  members and armed robbery the art of boxing.

In a text message he sent out from the prison, Ali said: “Boko Haram, armed robbers, etc have all agreed to forget about gun and bombs to embrace boxing, I hope FG will give them the opportunity to excel in that which corruption denied me. I have been in Kuje Prison since 19 February and have been teaching them boxing as a way of making a livelihood when they leave prison. I train them at 9a.m and 3p.m.”