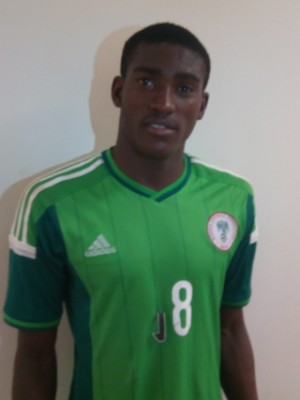 With Ghana’s Black Satellites out of their way, Nigeria’s Flying Eagles say the coast now clear for them to win the African Youth Championship, AYC, in Senegal this weekend.

In his post match comments after helping the Flying Eagles defeat the Black Satellites 2 – 0 in the semi – final of the AYC, Taiwo Awoniyi said that the squad will do everything to win the final on Sunday. The 17 – year – old also revealed that getting to the ultimate game of the tournament was one of the objectives of the Nigeria Under 20s before the start of the AYC.

“After reaching the final, we will put in our best to win it, “ Awoniyi said.

“We knew when we qualify for the FIFA U-20 World Cup, it will be easier to win the tournament.

“We came here to qualify for the FIFA U-20 World Cup and the second objective is to win the trophy.

“We are ready to make our fans at home proud. “

Meanwhile, Head coach of the team, Manu Garba, said of the game against Ghana: “It was a keenly contested game, my boys did not take off early, the best team won. We created lots of chances and could have scored more than two. Our objective is to be champions and whether it’s Mali or Senegal, we are ready for them”.