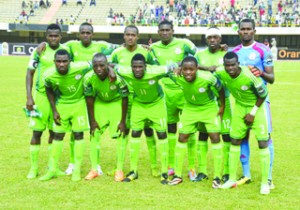 •Nigeria's Flying Eagles at the ongoing AYC in Senegal

Nigeria’s national telecommunications carrier, Globacom, has charged the Flying Eagles to ensure that they win the Africa Youth Championship, AYC, when they take on Senegal in the final of the U-20 competition on Sunday.

While commending the national youth team for defeating their West African rivals, Ghana by 2-0 in the first semi-final match in Dakar on Wednesday, Glo noted in a statement that Manu Garba and his boys have done a lot to earn the confidence of Nigerians

“We urge the Flying Eagles to ensure that they complete their outstanding performance in Senegal by winning the final match convincingly and lift the trophy for the seventh time.

“We also want to assure the team that Nigerians are behind them to succeed in the task ahead. They have made Nigeria proud so far in the competition. They can only consolidate their good run,” Glo stated.

Meanwhile, Sports Minister and Chairman, National Sports Commission, Dr. Tammy Danagogo has cautioned the Manu Garba-led side not to rest on their oars but put in extra effort until the final is won.

The minister stressed that it would be more honourable if they go to the FIFA U-20 World Cup later in the year as African Champions.

“What remains now is for them to go all out and redouble their efforts and ensure they win the cup so that they go to the World Cup as African Champions.

“Their performance so far shows that their World Cup triumph at the U-17 level two years ago was no fluke as they have now matured into a formidable side,” the Minister said.