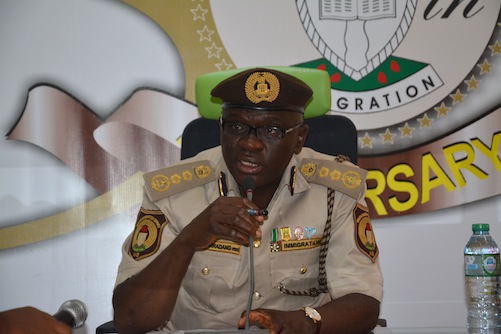 The Comptroller General of Immigration Service, David Shikfu Parradang, OFR, mni convened a meeting with some embassy officials and leaders of ECOWAS communities resident in Nigeria particularly our neighbours such as Republics of Cameroun and Chad at the Service Headquarters Abuja.

In a statement signed by Chukwuemeka Obuah, the Service Public Relations Officer, he noted that during the meeting, the Comptroller General told the officials and communities’ leaders to advise their nationals to steer clear from the forthcoming elections warning that any non-Nigerian caught interfering in the electoral process would be made to face the law. He stated that the warning has become necessary to ensure that the existing robust relationship among member states in the sub region is not undermined by unnecessary meddlesomeness in the internal electoral affairs of member states.

The Comptroller General announced that effective midnight 26th March to midnight 28th March 2015, all land and sea borders across the country would be closed to allow for a hitch free elections slated for 28th March 2015. He also enjoined the community leaders to advise any of their nationals who is in possession of Nigeria’s Permanent Voter’s Card, National Identity Card or Passport to surrender same immediately as anyone caught with any of them shall be brought before the law.

The Comptroller General noted that the Nigeria Immigration Service (NIS) will soon embark on biometric registration of all ECOWAS and other African citizens resident in the country. The exercise, he said, is to build a reliable database of all non Nigerians resident anywhere in the country. 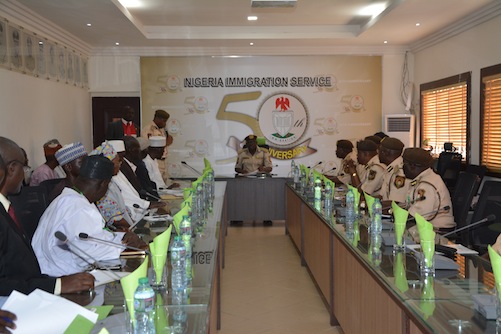 The meeting is one of the several efforts by the Service to sensitize non-Nigerians on their roles before, during and after the forth coming national elections. He had earlier held briefings with state Commands Comptrollers where he directed enhanced mop-up operation on all irregular migrants in the country.

Since the directives, a total of 2066 irregular migrants rounded up across the country have been removed from the country.

The meeting which had representatives of envoys and communities leaders from Niger Republic, Senegal, Chad, Cameroun Republic, Guinea and Mali was hugely interactive.

The participants were elated at the development and called for more of such interactive sessions with the NIS. They pledged their support for the success of the elections maintaining that the peace of Nigeria is very critical to the overall peace of the sub region, Africa and indeed the world.