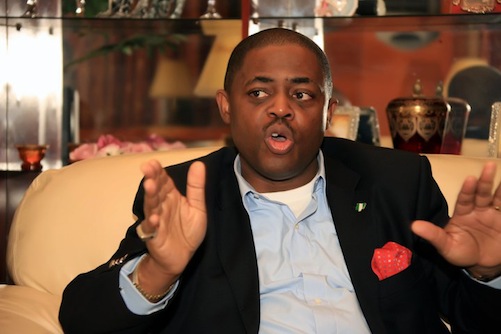 The Peoples’ Democratic Party (PDP) has alleged that the Master key (encryption/decryption) of the Independent National Electoral Commission (INEC) Smart Card Readers may have been compromised by the opposition.

Femi Fani-Kayode, Director of ‎Media and Publicity of the PDP Presidential Campaign Organisation, made the allegation at a news conference in Abuja on Wednesday.

Fani-Kayode alleged that the company that supplied the card readers for the general elections had links with the opposition.

According to him, a major shareholder and board member of the company, Act Technologies Ltd., is an ardent supporter of the APC.

“The master encryption/decryption Key can unlock and simulate the Permanent Voter Cards (PVCs) data processed by the smart card reader.

He said there was only one copy of the master key in the country, which he said, was in the possession of an individual and a known APC sympathiser and supporter.

This same individual, he said, was also the contractor responsible for the production of the PVCs and the supply of card reader to INEC.

He wondered why INEC would contract the supply of the card reader to an APC supporter, noting that “this constitutes a serious breach of security.

“This has grave implications for the PDP as the opposition APC armed with the master key and sufficient VINs can actually simulate the same data transmitted from any smart card reader deployed for the elections at will.

“The situation is even now worsened by the fact that APC no longer has to purchase VINs or PVCs as they can now download the entire VINs directly from the INEC database.”

He stressed that the development if not handled properly and looked into was serious enough to affect the outcome of the coming presidential election in a negative way.

Fani-Kayode, however, said that the organisation and the PDP candidate, President Goodluck Jonathan, were not in any way worried about what the outcome of election would be.

He said that PDP had the backing and support of Nigerians, adding that “it will not only win the elections but will win convincingly.

“Whatever we share with you here today does not in any way mean that we shall not participate in Saturday’s election or that we are worried about how we will fare.

“The fact of the matter is that we shall not only participate but we are also very confident of winning.”

He further expressed the hope that Nigerians would give Jonathan a fresh mandate for the next four years regardless of the antics of the opposition and those covertly working for them.

Fani-Kayode said the essence of sharing the information was to alert Nigerians and security agencies of what was going on and to ensure that INEC did the right thing.

He said that it was critical for INEC to answer questions raised on the issues and put its house in order so that the outcome of the election was not in any way questionable.

The campaign organisation spokesman enjoined PDP supporters and polling agents to be vigilant, guard and protect their votes.

He advised them to stay at the polling booths after voting to ensure that their votes were counted and not manipulated or changed.