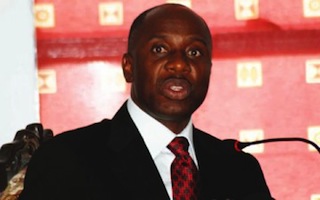 Ahead of the March 28 General elections, Rivers State Governor, Rotimi Amaechi has accused President Goodluck Jonathan and the Peoples Democratic Party (PDP) of breaching the Abuja Peace accord. He also accused the President and the PDP of inciting violence in the country.

Amaechi also accused the President’s wife, Mrs. Patience Jonathan of taking over control of the police in Rivers state.

According to him: “Members of APC have been crying out loud to the country and the world. In Rivers state, the wife of the President, who is from Rivers state has taken over the Police Force. On Tuesday night, the Commissioner of Police attempted to arrest a member of the Rivers State House of Assembly and the reason for doing that is to ensure that APC members don’t come out on election day.

“And as I speak to you now, the lawmaker has moved into the Government House for protection. Moreso, we have over 400 APC members in police detention. The other day, I asked the Police Commissioner and he told me that those arrested were criminals and why should I ask him to release them. Do we only have criminals in APC?,” Amaechi quizzed.

“What about the period when the APC gubernatorial candidate Dr. Dakuku Peterside led members of the Party to a rally in Okrika. The APC campaign train was shot at, by hoodlums and PDP members. Now, ask the Commissioner of Police if he carried out any arrest? In that attack it was observed that the PDP killed a policeman and injured several APC members. The Commissioner of Police is totally helpless,” Amaechi explained.

Continuing Amaechi said, “In the same vein, on Tuesday, PDP hoodlums went to the House of the Commissioner of Power, Hon. Augustine Nwokocha wearing military uniforms and killed his relations, injured others and further burnt down the house of his personal assistant. All these attacks and impunity can measure that the elections can be free, but, may not be fair”.

Amaechi noted that APC is not contesting the election against PDP all over the states across the country but against the institutions of government.

He said such institutions include; the police and the military and informed the diplomats that the Chief of Army Staff, Lt. General Kenneth Minimah who is from Rivers state has deployed Special Military to Opobo/Nkoro local government area where he comes from, and incidentally, the APC governorship candidate, Dr. Dakuku Adol Peterside comes from Opobo. So, you virtually expect resistance and nobody is concerned about the plight of APC.

He said APC may go back to the International Criminal Court (ICC) where the United Nations will witness how President Jonathan and the PDP are using the police and military to trigger violence,” Amaechi said.

Amaechi also condemned and described as totally unacceptable and unconstitutional the conspiracy between President Jonathan and the PDP against the Federal High Court and Court of Appeal Judgments restricting President Jonathan from deploying the military in the March 28th and April 11, 2015 general elections.

“It is important that you put this incidents on record. I don’t know why the battle is here or maybe the battle is here in Rivers state because in the past PDP used to score two million votes. And now it appears it will no longer be business as usual.

Earlier, Dr. Mohamed Ibu Chambas said the delegation was in Nigeria to sensitize and advise political parties and candidates to ensure a level playing ground.

“We are focusing on the elections because of the concern of the international community. The focus globally is on Nigeria, especially on the elections. The Presidential Candidates, President Jonathan and General Muhammadu Buhari have signed a peace accord ahead of the elections and they should allow INEC conduct free and fair elections,” he said.