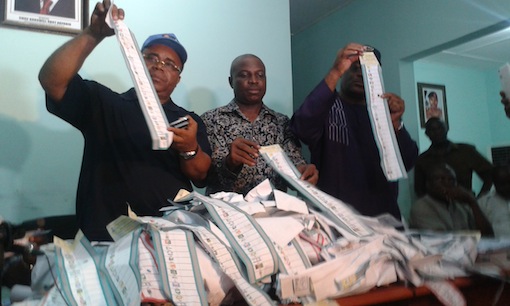 The Akwa Ibom state chapter of the All Progressives Congress (APC) has called for the cancellation of the presidential and national assembly elections in the state.

The party is also calling for the redeployment of the Independent Election Commissioner, INEC, Resident Commissioner for the state, Mr Austin Okojie.

The party claimed that Okojie has been instrumental to the sham Presidential and National Assembly elections conducted in the state yesterday.

Addressing a press conference in Uyo, the State APC Chairman, Dr. Amadu Atai demanded that aside from re-deploying the Resident Commissioner, the election conducted in the state should be out-rightly cancelled.

Dr. Amadu said his party after a review of the field reports on the elections across the state, came to the conclusion that the elections should be cancelled because they were not conducted in line with the guidelines issued by the Independent National Electoral Commission for the conduct of elections.

“Most of the polling units did not have result sheets. In the few units where result sheets were provided they were found to be fake. Copies attached. Also, the results were not announced and pasted in the various units as required by the electoral law”.

Giving other instances of the irregularities that mar the election, Dr Amadu said “The elections were marred by other forms of irregularities. In Ibesikpo Asutan Local Government Area, the Commissioner for local government and chieftaincy affairs in the administration of Godswill Akpabio, Prince Uwem Ita Etuk, went around with policemen and thugs beating up and maiming people while carting away voting materials at almost every polling unit in the area. Uwem Ita Etuk’s conduct during the elections is consistent with his threat of violence during in the lead-up to the elections.

“There were also widespread violence and other irregularities in polling units in Ukanafun, Ibiono Ibom, Nsit Atai, Uyo, Etinan, Obot Akara, Oruk Anam, Itu and other Local Government Areas across the state. In most parts of Ukanafun, INEC staff took sides and refused to be an umpire in the elections. In Unit 2 of Ward 10 in Ukanafun, INEC officials refused to record votes for the presidential candidate of the APC.

“Throughout Saturday night and up to 1 pm today (Sunday 29 March,1 pm), thumb printing of ballot papers and collation of results are ongoing in the houses of the following government officials: Aniekan Umana, commissioner for information, in Abak; Governor Akpabio’s country home in Ukana; Don Etim, Commissioner for Works in Ikot Ekpene; Emmanuel Enoidom, commissioner for special duties in Etim Ekpo; Enobong Uwah, commissioner for environment in Uyo; Senator Effiong Bob in Nsit Ubium, and Eno Akpan, Commissioner for Lands and Town Planning in Ukanafun, just to mention a few”.

Also speaking at the press conference, APC Governorship candidate in the state, Obong Umana Umana said that official complaints has already been forwarded to INEC over the incident.

He said that the entire election in the state was a total fraud as INEC officials had already colluded with Peoples Democratic Party, PDP members to rig the election.

Speaking on the party’s next line of action, Umana said the party will wait for the outcome of INEC reaction on the complaints before taking further steps.

Meanwhile results from several local government area in the state are already been sent to the INEC office in Uyo.