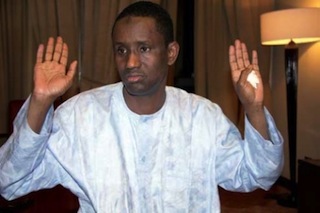 He was trailing a distant third in a contest locked up for Senator Jibrilla Bindow of the All Progressives Congress. Marcus Gundiri of the Social Democratic Party, who once lost an election to the former governor, is second.

Nuhu in his concession speech said he took his loss in good faith because leadership is a product of God’s anointment.

“My dear people of Adamawa State, I greet you in the best form of greetings. I had dreamt of coming back home to lead our dear state to greater strides after years of underdevelopment.

“I started this journey in August last year and successfully got the mandate of the Peoples’ Democratic Party (PDP) to fly its flag for the April 11 gubernatorial election. I came into this race knowing fully well that political contests are two-way traffics – one either wins or loses.

“As a man of faith, I was also aware that leadership responsibility is a product of God’s anointment.

“In the course of this journey, I have seen genuine support and encouragement from the people of Adamawa State.

“Several individuals from Adamawa and beyond contributed generously to keep the campaign going and many others devoted their time, energy and intellect to see to the success of this project. I sincerely appreciate this belief in my person and my ambition.

“The support I got from my party’s leadership and individual members from President Goodluck Jonathan down to the party agents in our polling units was overwhelming and gratifying.

“The party leader in the state, Barrister Bala James Nggilari and the state party chairman, Chief Joel Madaki led their lieutenants in making this journey memorable.”

Ribadu said he had no choice than to accept the preference of the majority for Bindow.

“I came into this race with lofty dreams and clear vision for our dear state, but the voice of the majority has not given me this chance. I take this in good faith.

“I want to take this opportunity to congratulate the winner and pray that at the end of it all our dear state will witness the needed progress and development it so much desires. God bless Adamawa State, God bless the Federal Republic of Nigeria.”