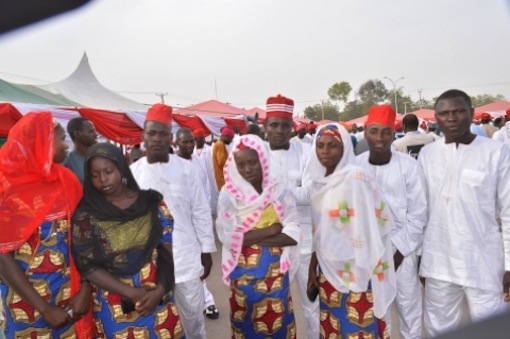 More than 3, 000 couples were married off in various mass weddings held in four states of the North West within the last three years NAN reports.

NAN reports that the mass weddings were initiated by state governments and private organisations largely for widows, orphans and divorcees in the areas.

In Kano State, 2, 450 couples benefitted from the programme introduced by Gov. Rabi’u Kwankwaso in 2013.

Hajiya Zahra’u Umar, the Deputy Commander, Kano State Hisba Board, told NAN that the event was in four phases, with the first set consisting of 100 couples, followed by 250, 1, 000 and 1, 100 couples respectively.

She described the programme as “very successful”, adding that the board had resolved less than 10 per cent complaints it received from some of the couples.

“Some of the cases are attitude related which the couples found after the weddings and they reported to the board for resolution.”

Umar explained that all the couples had undergone series of sensitizations prior to the wedding, to ensure harmonious living.

She revealed that each of the women received N20, 000 grant to set up businesses, so as not to be fully dependant on their husbands.

Umar listed some of the challenges facing the programme to include inadequate time to prepare the couples, managing new behaviours of some of them and health related issues discovered after the marriage.

According to her, the programme has helped to identify those living with HIV/AIDS, some of whom did not even know they have it.

She noted that donations by the public and non-governmental organizations had facilitated the training of the women in various skills to empower them to be self reliant.

According to her, the board has set up a monitoring team to keep track of the couples and offer advice in case of any dispute between them.

In Kaduna, the Secretary, Darul Rahma Foundation, Malam Abdurrahman Adam said that the mass wedding organised by the foundation in April 2014 was a huge success.

Adam told NAN that only six cases of divorce were recorded out of the 100 couples married off during the ceremony.

“The objective of the mass wedding has been achieved. Our target is to reduce the number of unmarried women in the society, and we have done that successfully”, he said.

He said that the foundation was tracking those who benefited from the gesture.

Adam said that the organisation had also set up a dispute settlement mechanism to intervene in case of disagreement among the couples.

“There is no marriage without a problem, so we do settle amicably, issues that crop up from time to time.

“In case of those that were divorced, we had looked at the issues that came up and agreed that the best option was for the couples to separate.

“No man is allowed to divorce his wife without our knowledge. Before the marrige, we signed agreement with them so that any problem that comes up, we have to know”, Adam said.

The secretary disclosed that about N20 million, in cash and kind, were raised for the mass wedding from donations received from the general public.

Adam said N1.5 million was spent on the payment of dowry, while part of the money was spent on the purchase of household items and other materials such as sewing machines, to assist the women establish businesses.

“No amount was give to any man; we ensured that those coming over for the marriage had something doing to support the family.”

The secretary recalled that a lot of people had come over with the intention to cheat, but were detected and sent away.

“Some of them were married but they came and lied so that they can benefit from what we bought for the women like beds, mattresses, kitchen utensils and other things, and when we found out, we retrieved the items,” he said.

He also observed that some of the women sold off the items bought for them instead of utilising them properly to enhance their livelihood.

In Zamfara, the 273 couples that benefited are living peacefully, according to Malam Sani Usman, Secretary, Widows and Divorcees Association, organisers of the mass wedding.

Usman said the mass wedding, supervised by the state Hisbah Commission, was funded by well-to-do individuals in the state.

“The majority of the couples are living peacefully except for some minor cases which we resolved amicably at the association’s level.”

Also, the Chairman of the state hisbah commission, Dr Atiku Zawiyya described the efforts of the association as “wonderful”.

Zawiyya said the state government would soon commence the financing of the programme.

From Sokoto, where the state government spent N30 million on the mass wedding of 125 couples in January, 2014, a new set of 250 couples would soon be joined in matrimony.

“Each of the brides was also given a set of furniture, bed and beddings, and other household utensils,” said Alhaji Aliyu Kofar-Rini, the Chairman, Sokoto State Sunnah Marriage Mediation Council.

He commended the state government for sponsoring the exercise, saying that it had drastically reduced the number of unmarried men and women in the state.