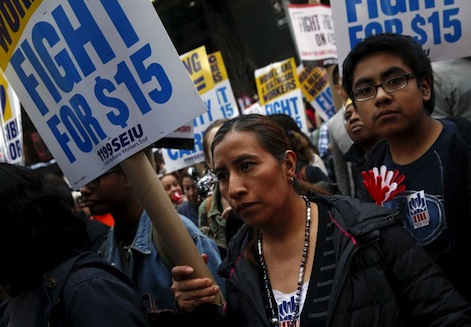 Thousands of demonstrators, including many fast-food workers, protested in New York on Wednesday demanding a minimum wage of $15 an hour to escape poverty in America’s largest city.

Fast-food workers held strikes in more than 230 American cities, joined by airport, construction and child care staff, as well as people working in education, organizers said, calling it the largest mobilization of underpaid workers in the US.

“It’s not enough. You have to be a magician to survive on that,” said the Guatemalan-born family man. “Once you pay your bills, there is nothing left in your pockets.”

In New York, a first protest began at around 6:00 am outside a McDonald’s outlet in Brooklyn.

In Manhattan, fast-food workers were joined by students and activists, spreading out on the sidewalk outside another McDonald’s to demand better salaries, an AFP photographer said.

They held up placards proclaiming: “Why poverty,” “Fight for 15” and “Because the rent won’t wait.”

Workers say they are fed up with pay that does not come close to keeping them out of poverty and the threat of retaliation from employers hostile to them joining or forming unions.

On April 1, McDonald’s said that it was raising hourly pay to $1 above the local official minimum wage for 90,000 employees in company-owned restaurants, and would offer them paid time off.

The increase, however, does not apply to 660,000 employees working for restaurants owned by franchises, which comprise 90 percent of the 14,000 McDonald’s outlets across the United States.

“Rather than mollifying employees, the paltry pay move is attracting ridicule and inspiring even more workers to join the walkout,” strike organizers said.

New York City Comptroller Scott Stringer said in a report on Tuesday that even when adjusted for cost of living, New York’s minimum wage is the lowest of any major US city.

Pay of $15 an hour would save taxpayers $200-$500 million a year in food stamps and Medicaid spending, his report said.

San Francisco and Seattle have both adopted minimum wages of $15.

In August 2013, fast-food workers launched their first national day-long labor strike, in 60 cities, and their outcry has increasingly resonated in national politics.

President Barack Obama has faced stiff Republican opposition in his push for an increase in the minimum wage to $10.10 to lift hundreds of thousands of people above the poverty line.