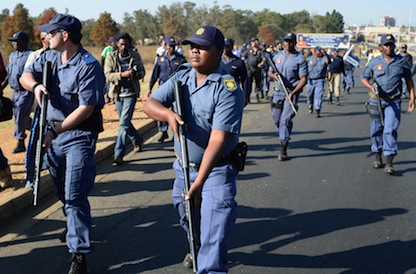 South African police on Thursday vowed to quell a wave of anti-immigrant violence after attacks spread to Johannesburg overnight and fears grew that the country’s economic troubles could spark widespread unrest.

At least six people have been killed in the last two weeks in attacks in the Indian Ocean city of Durban targeting shops and homes owned by Somalis, Ethiopians, Malawians and other immigrants.

Earlier this year, xenophobic violence also erupted in Soweto, near Johannesburg, as frustration deepens over lack of opportunities for many young blacks born since the end of apartheid in 1994.

South Africa’s economic growth was just 1.5 percent last year and unemployment is at around 25 percent — soaring to over 50 percent among the young.

“There are tensions in various parts of the country between some locals and foreign nationals (but) lawlessness will not be tolerated,” National Police Commissioner General Riah Phiyega said in a statement.

“Overnight, there was a flare-up of violent attacks and looting in Jeppestown, Johannesburg,” the statement added.

“Six male suspects have been arrested for public violence and housebreaking. The suspects allegedly broke into foreigners’ shops.”

Police, who also reported tensions in Pietermaritzburg city, called for community leaders to help restore calm and added that false rumours of attacks were increasing fear.

President Jacob Zuma made a statement late Wednesday condemning the attacks and admitting the government had been slow to tackle some issues behind the violence.

“This now must stop, because we cannot continue killing one another,” Zuma said in a public radio and television address.

“We cannot accept that when there are challenges, we then use violence, particularly to our brothers and sisters from the continent.”

He said he was aware of people’s frustrations, and added that “perhaps as (a) government we have not been very quick in addressing these issues.”

In Durban more than 1,000 immigrants have been sheltering in a guarded camp after fleeing their homes in surrounding townships.

“Anytime can happen now,” said Ali Abdi, a Somalian who runs a clothes shop but is now sleeping in the camp.

“There is not just one reason. Some of it is foreigner hatred, especially against African foreigners. The other reason would be jealousy.”

Violence against immigrants in South Africa is common, with unemployed locals accusing foreigners of taking their jobs.

In 2008, 62 people were killed in similar violence in Johannesburg townships.

Anti-xenophobia campaigners plan a march in Durban on Thursday to pressurise authorities to do more to protect immigrants.