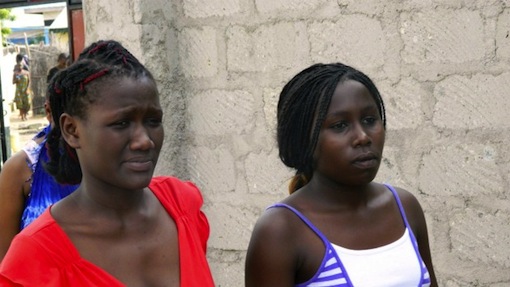 Students of the Garissa University College get out of a house where they were taking shelter
www.smh.com.au

All four gunmen from Somalia’s Al-Qaeda linked Shebab who carried out the Kenyan university massacre earlier this month were Kenyans themselves, reports said Thursday.

The militants attacked the university in the northeastern town of Garissa on April 2, lining up non-Muslim students for execution and killing 148 people in what President Uhuru Kenyatta described as a “barbaric medieval slaughter”.

One of the four gunmen killed by Kenyan special forces who ended the day-long siege has already been named as Abdirahim Abdullahi, an ethnic Somali Kenyan national who was top student and law graduate.

But Kenya’s major Daily Nation newspaper, quoting unnamed intelligence reports, said the other three gunmen killed were also Kenyan, believed to be from the port city of Mombasa and the far western district of Bungoma.

The fact that all four are reported to be Kenyans highlights the Somali insurgents’ ability to recruit within Kenya.

“Identities will be confirmed once their fingerprints are matched,” the Nation said, citing intelligence officials.

There was no immediate response from Kenyan police to confirm the report.

After the attack, Kenyatta warned that the terrorists were “deeply embedded” inside Kenya, not just Somalia.

A $215,000 (200,000 euro) bounty has also been offered for alleged Shebab commander Mohamed Mohamud, a former Kenyan teacher said to be the mastermind behind the attack.

While the Shebab emerged as a Somali Islamist group in 2006 in Mogadishu, they have recruited across the wider region.

The group has carried out a string of revenge attacks in neighbouring countries, notably Kenya and Uganda, in response to their participation in the African Union force fighting them in Somalia.

Following the attack the Shebab warned of a “long, gruesome war” unless Nairobi withdraws its troops from Somalia, saying the gunmen carried out the Garissa attack in revenge for the “systematic persecution of the Muslims in Kenya”.

Shebab fighters also carried out the Westgate shopping mall attack in Nairobi in September 2013, a four-day siege which left at least 67 people dead.