Chibok Girls: Will They Ever Be Found? 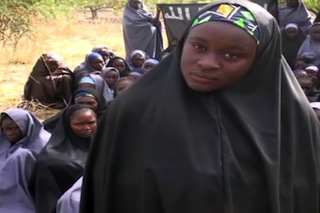 The question is will the chibok girls be found and then returned? As to their state of being, there’s no guarantee they’ll all be found well and alive. I presume some of them may already be dead and the others badly traumatised and on the verge of losing their lives either through illness or maltreatment. It would take a miracle for them to return return alive.

They are young girls and we don’t know the kind of environment they’ve been exposed to. Some might have gotten ill and probably dead, I hope not.

We keep hope and faith alive and pray for strength for their families. A lot of time that has elapsed after the various unsuccessful attempts by the Nigerian military to rescue them. And There have been rumors that the girls have been sold to neighbouring countries.

Well, I would say that for the girls to be found alive is really not too certain considering the number of days the young girls have spent in captivity. Some might return if decisive actions are taken now to root the insurgents out of their acquired territories. One year on, the government cannot trace the girls’ whereabouts and nothing has been heard from their captors in the last two months. At a point, government raised our hopes by saying it was in talks with the insurgents only to discover it was hoax. The onus now lies with the incoming government to show some sense of direction. I have lost hope in the current administration of Goodluck Jonathan to rescue the girls alive.

Even if they are found and that’s on the basis of probability, they would have been brainwashed. They’ll be the next big thing when we talk about monsters. Am sorry for their families because it’s a great loss to them. If they are ever  found, some would have been raped, tortured, depressed, demoralised, some would be suffering from bipolar mental illnesses of all sorts. We’ve all witnessed how devilish this men are. I am not expecting a miracle about those girls.

Well, so far 57 or so have returned home. But for the rest of them, some would have died because we all heard that the Boko Haram guys were killing their wives to go await them in heaven for holy reunion.

Yea they can return alive. But nobody or government can guarantee the return of all of them or even returning them in good condition.This is a war situation and the abductors are not father Christmas or puppet men. They are terrorists, disillusioned and devoid of human feelings so it will be wrong to assume that any of the children wouldn’t have been raped, died of sickness or epidemic or even a casualty of the multinational joint force invasion.

Yes, they can return alive but definitely not all of them. The ones that would return would be a disaster to their respective families and the nation as a whole. What good can come out of anyone being in Boko Haram custody for over a year? If they eventually return, I’ll suggest they are taken to special homes for care.

The fact is that if the girls are still alive, there’s strong possibility that they can be brought back.

It might be difficult to comprehend but the truth of the matter is those girls might never return. The government has failed by not rescuing them immediately they were abducted. In fact, we had foreign intervention and there was no result. I won’t be sorry to say that the politicians are behind all of this. They are always ready to do anything at the detriment of others. They don’t care about doing anything to get to power. If the Nigerian military is said to be one of the best in the world and they failed to rescue the girls, I wouldn’t be sorry to say they have failed woefully because they couldn’t carry out the assignment given to them in their own country.

Nobody can say exactly where these girls are now and let the truth be told, if they ever return, not all of them will be be seen. Only God knows whether they have been separated or what their condition is right now. It is a year now and they are still in captivity. Are they being fed? The love and affection is not there. Some might have died as a result of emotional trauma. It is really sad that we are still where we are. We hope the new government will make a difference as they have preached because for me, my hope for this country is almost lost.