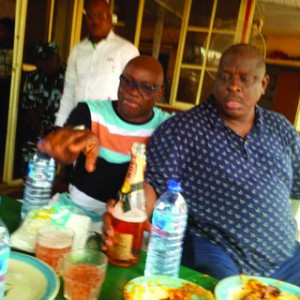 Senator-elect, Ogun East Senatorial District, Buruji Kashamu has said he is not running away from trial in the United States of America for alleged drug related offences only that he insisted that due process should be followed by the United States.

In a statement he personally issued late on Tuesday night, Kashamu said: “I am not running from any trial. All I have asked is for the relevant parties to follow due process – if they believe that I yet have a case to answer. I believe in the supremacy of the almighty Allah who frustrates the signs of liars and makes fools of diviners, who turns wise men back and makes their knowledge foolish. He is the ultimate decider of the fate of all mortals. When He says yes, no man can say no and when He says no, no man can say yes!

“I stand with the almighty Allah, Subhana Wa Tala. He is the protector of all men. He is my refuge and shield. Let no one play God!”

In the statement, he also told the National leader of the All Progressives Congress, APC, Asiwaju Bola Tinubu, to be a true democrat following Tinubu’s attack on him over the congratulatory message he placed in the media eulogising his qualities.

Kashamu said his attention had been drawn to Tinubu’s reaction to the innocuous congratulatory messages he sent to him and other leaders of the APC after the general elections that were concluded on Saturday, 11 April.

“First, I must say that I doubt if the statement was approved by him (Tinubu). However, if it was, I must state that I am taken aback by the unwarranted attacks against me as if we were still campaigning. It is unbecoming of someone of his stature and calibre.

“For me, it is high time politicians and leaders rose above petty issues and raise the bar in constitutional democracy. We should not just be democrats in words but also in deeds. We should play politics without bitterness,” he said.

Kashamu stated that it was on record that no Nigerian politician had taken former President Olusegun Obasanjo to the cleaners even as a sitting President like Asiwaju Tinubu did and that yet, Obasanjo forgave him.

“As for me and Baba Obasanjo, he remains my father and leader, just as I am his son and follower. At no time did I abuse Gen. Muhammadu Buhari. As a true party man, I campaigned vigorously for my party and its candidates. Now, the elections are over, and as a true sportsman, I thought I should congratulate those who won.

“Short of any praise-singing, what I said in the congratulatory message that they chose to react to a week after it was published was that there was no way anyone can wish away the achievements of Asiwaju Tinubu in the nation’s political annals, particularly in Yoruba land.

“He accused me of purchasing my election with money, the appropriate forum to prove that is the election petitions tribunal and not the pages of newspaper. On the U.S case, I wish to state for the umpteenth time that the United States as the bastion of democracy and the rule of law would not lend itself to any form of abuse of the fundamental human rights of an innocent soul, especially one that has been arrested, tried and freed by its most trusted ally – the United Kingdom,” he explained.

The congratulatory message placed in some national dailies by Kashamu read: “Although I now belong to the opposition, your (Tinubu) achievements transcend political divides and I am not ashamed to publicly acknowledge them. I salute your courage, commitment, doggedness, forthrightness and tenacity of purpose even in the face of daunting opposition and challenges.

“By your sheer wit and unwavering commitment to democratic ethos, true federalism and economic prosperity, you led the Alliance for Democracy (AD) from a one-party state to a regional party, and now a national party that is about to form the government at the centre.”

Replying on Tuesday, Tinubu rejected the praises showered on him by Kashamu, describing him as a pretender, saying there was no basis for comparison between himself and Kashamu, adding that he felt insulted by the open letter addressed to him by Kashamu.

The former governor, in a statement by his media adviser, Sunday Dare, said the days of false adulation were gone in Nigerian politics, saying that fake praise singers like Kashamu would find that their particular craft was no longer in vogue.

“During this election cycle, their practice has dramatically turned from the way things are to how things used to be. Politicians will no longer be able to change direction and loyalties as if they were changing clothes. Those in politics must know that responsibility and accountability shall now follow them. One can no longer walk both sides of the street at the same time. In case Kashamu has not noticed, the politics of principle defeated the politics of posturing,” he said.

Tinubu said it was ironic that Kashamu could praise him after conspiring with other PDP leaders to produce and broadcast a hate documentary against him, adding that Kashamu’s actions and lifestyle showed that President Goodluck Jonathan and the leader of the PDP in Lagos, Chief Bode George, were his true role models.

Tinubu said Kashamu, who was rude to elders like former President Olusegun Obasanjo could not be his political son, saying that “Kashamu may be prodigal, but he is no political son of Tinubu. Kashamu’s political lineage tracks to people like Bode George and President Jonathan. He should direct his encomiums to these men who are his true role models. They need his contrived affections more than Tinubu does.

“This same Kashamu rained insults on former President Olusegun Obasanjo in a vicious campaign of calumny. Kashamu’s party, the PDP, sponsored defamatory documentaries full of lies and innuendos against me, General Muhammadu Buhari and other leaders of the APC. Kashamu should turn himself to the United States’ authorities over the accusations of drug smuggling levelled against him. It is only then will I believe that he is a reformed person.”

According to Tinubu, as a person of repute, he could not be seen to be hobnobbing with people of questionable character as this would affect his reputation across the world, urging Kashamu to keep his peace until he took a trip to the USA as a senator-elect.

“Upon your return, we can then have a conversation. We can then proceed with your repudiation of the PDP with a promise that you will stop corrupting and fouling the political system. I am a patriotic, law abiding Nigerian and my achievements make me world-renowned. I am a global citizen that travels freely to the USA, the United Kingdom and other nations.

“I associate with individuals who seek democracy and good governance for all. I do not spend time with characters whose values are at variance with societal expectations and laws governing a decent society,” he said.