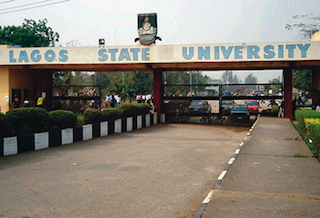 The Lagos State University Students’ Union, LASUSU, has made a demand for the immediate re-opening of the institution.

According to a press release made available to P.M. NEWS, the President of the students’ union had in a statement issued last month, faulted the management’s decision to close the school down as a result of the electoral process.

The students’ argument also lies on the fact that the continued closure is beginning to take its toll on them and they are really agitating for a re-opening with immediate effect.

“It is three weeks now since after the elections across the federation without any formal pronouncement on resumption date.

“We would like to reiterate that the continued shut down of academic activities on our various campuses is taking its toll on our students, and the Students’ Union is firmly against this.

“It should be noted that upon the announcement of the said recess, the Union had urged the management to give a specific date of resumption but declined. The political atmosphere has been calm and peaceful and as such, we believe the management should have towed the part of other higher institutions that declared election recesses and thereafter, resumed activities,” the statement read in part.

The Students’ Union says that it is also worried about the development, adding that with the academic calendar still running, they may be forced to go with the tradition in LASU which will ensure that students are rushed into writing exams eight weeks after resumption due to crises.

It stated further that: “secondly, our graduating students who are expected to resume NYSC camp on the 5th of May have their fate hung as a result of the protracted face off between the Staff Union and the management. We urge the wary faction to swiftly reach a compromise as we will stand tall to face anybody who intends to sacrifice the future of students on the alter of personal gains.

“Thirdly, it should be noted that our final year law students are expected to proceed to law school with their colleagues from other higher institutions. On this note, the current crisis should be resolved immediately so as to make this possible. We want a shift from the norm of backlog of law students waiting for space for law school as this will enable them proceed on the mandatory NYSC programme.

“On the Issue of Convocation, it is saddening that it is only in LASU that you find cancellation of convocation ceremonies few days to the event regardless of what parents and guardians might have expended for such purpose.

“The tradition of non-issuance of certificates to the convocating students at convocation ceremony must stop, as this does not conform with global academic standard.

Therefore, we call on the school authority, staff and Lagos State Government to find a common ground in order to paddle LASU to the promise land, as we wait anxiously for a rescheduled convocation ceremony soonest.

“On the issue of the Current State of the University, we urge all concerned to, as a matter of urgency embrace peaceful dialogue, noting the fact that the demands presented by the staff unions should be immediately looked into by the Lagos State government and the management in order that academic activities return to LASU campuses.

If truly LASU must continue to be great, students, staff, management and Lagos State Government must work in unison. “Self aggrandizement, personal gratification and self glorification should be cast aside. We should not forget that the main objective of establishing this citadel of learning is purely for academic purpose and to produce quality graduates who will add value to the larger society. Any other objective is complimentary and we do know that this can only be possible citeris paribous.

“Finally, we want to state emphatically that the Students’ Union leadership and the student populace would no longer tolerate any further delay that will impend the quick resolution of the ongoing crisis.

“To this end, we therefore present our demands as follows: Immediate Re-opening of the school, Immediate reconciliation between the management and staff unions and granting of the later’s reasonable demands, that convocation ceremony be rescheduled before end of April, that the Lagos State Government should assume the position of an unbiased umpire in the ongoing crisis between the Management and the Staff Unions and that failure to meet these demands within stipulated period meant that the Union would act decisively”.