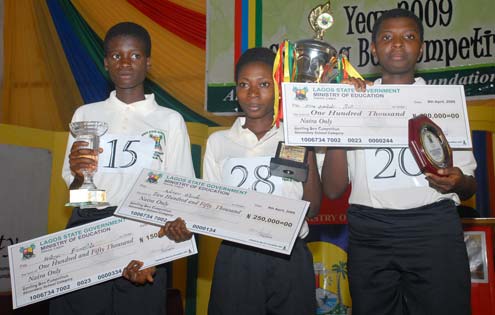 Boluwatife Tijani, a 12-year-old pupil of Araromi Primary School, Agege, on Wednesday emerged the winner in the 2015 Spelling Bee competition in Lagos State.

Tijani, a Primary Six pupil, competed with 56 other contestants representing the 20 local government areas and 37 local council development areas in the state in the competition held in Ikeja.

Mrs Ronke Soyombo, Director-General, Office of Education Quality Assurance, said that the competition was aimed at developing the innate skills of pupils and students.

Soyombo said the competition had been able to fulfill the ultimate goal of creating healthy rivalry amongst students as well as drawing out their intellectual capabilities.

She said that the agency had already set in motion machineries aimed at improving the quality of education in Lagos.

The Director-General said that the competition was the brainchild of the former first lady of the state, Sen. Oluremi Tinubu, the founder of New Era Foundation.

“The idea of spelling competition, conceived in 2006 to encourage academic excellence, was adopted by the Lagos State Ministry of Education.

According to her, it is also creating good reading habits that will lead to better academic performance and boost the confidence of participants.

She said this was with a view to preparing the pupils/students for future endeavours and igniting the spirit of competition among them.

Some of the winners who spoke to NAN commended the state government for introducing the competition.

Tijani said that she studied the dictionary very well in order to emerge the winner.

“I am very happy and excited, I always read my dictionary and I thank God that I won the first position.

“My parents are traders; they support me in all that I do.

“I will spend my money on my studies because I want to become a medical doctor,” she said.

Ifaniyi said that she read her English textbooks and dictionary everyday to improve her spelling ability.

“I am very happy for winning the second position; I won with the help of my parents and teachers.

“I thank my mother, she sells recharge cards and support me in everything I do,” she said.

The class teacher of Tijani, Mrs Olubumi Adewunmi, said she was happy with the success recorded by her pupil.

Adewunmi, an English teacher, said the competition had improved the performance of students.

“She has made our school proud today; this is the first time we are winning the competition.

“We expected her to win because we coached her very well for the competition.

“She is a very outstanding girl in the school, she participated in all activities in class,” she said.