S.African police say murdered nun, 86, may have been raped 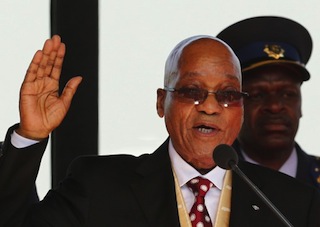 South African President Jacob Zuma takes the oath during his inauguration ceremony at the Union Buildings in Pretoria May 24, 2014.

Police in South Africa were on Thursday investigating whether an 86-year-old nun of Austrian origin found murdered had also been raped.

The body of Sister Getrud Tiefebacher from the Sacred Heart Home Convent in the village of Ixopo, southwest of Durban, was discovered in her room on Saturday.

Police said her hands were tied with an electric typewriter cord and she had been suffocated with a towel.

“It is also suspected that the victim was raped before she was killed,” a statement said.

An undisclosed amount of foreign currency was taken from Tiefebacher’s room.

The killing has shocked the small village, which is the setting for Alan Paton’s famous novel Cry the Beloved Country.

“Police have not made any arrests in connection with the crime. The search is ongoing,” police spokesman Thulani Zwane said.

Zwane said Tiefebacher came to South Africa 50 years ago and had spent all her time working for the Roman Catholic Church.

Rape is common crime in South Africa, with 662,649 cases reported in 2013/14, according to official crime statistics.