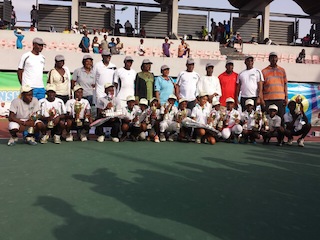 The player who recently returned from a nine-week tour of Egypt, defeated Kokou Missodey, ranked 1564 in the world 6-1, 6-2 to cement his place in the second round of the money-spinning tournament.

Henry Atseye also routing Borges Pereira Kevin from Brazil, 6-1, 6-1 in a one-sided affair at the Package B of the National Stadium, Abuja, venue of the competition.

Playing at the centre court, Atseye gave his opponent no breathing space as he quickly raced to a 4-1 lead before finishing him in less than two hours under intense heat.

Thomas Otu ensured a hat-trick of wins for Nigeria as he was responsible for the scalp of Merunka Stefan, a Croatian player ranked 2184 in the world.
Moses told our correspondent after the win that, “I was happy with the win, but then I think I have improved on my game since my last tournament.

“I have grown in confidence and I believe that with this win, I can sustain the momentum. I have a more direct approach of play now, that makes me a better player.”