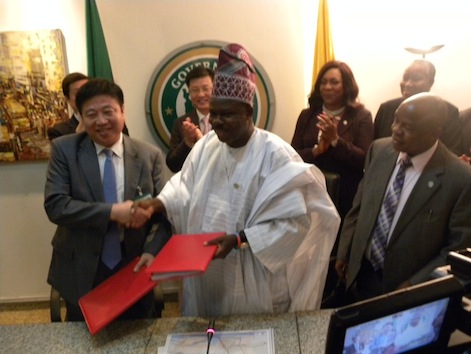 Governor Ibukunle Amosun of Ogun state, Southwest, Nigeria has reinstated his administration’s commitment to the provision of the social infrastructure across the nook and crannies of the State.

He disclosed that all the ongoing road projects in all the three Senatorial districts in the state will be completed soon.

The governor also hinted that much attention will be given to rural development in his second term programme, saying this was part of his campaign promises to the good people of Ogun.

Amosun stated this Monday morning while signing a multi-billion dollars inter and intra rail network project with the leadership of the Chinese giant construction company, CCECC.

The signing, which took place at the state government conference hall had in attendance the Chinese Consular General in Lagos, Liu Kan and the Head, Chinese Economic and Commercial office, Lagos, Zhang Pong.

Amosun revealed that the project is a landmark achievement of the present administration, hinting that, during the 40th anniversary of the state, something visible and reasonable must have been on ground for people to see.

The intra-rail network are those that will be within the Abeokuta metropolis, which will depict the real capital city of the new industrial hub of the country.

Findings by our correspondent revealed that the light rail network project will gulp about £3.2billion.

On the inter city network, the rail project will have its terminus in Abeokuta and will be moving through Abeokuta – Sagamu-Ijebu Ode-Redeemed Camp and Abeokuta-Ota – Winners Chapel- Ilaro-Agbara-Igbesa and other areas along that axis.

He maintained that resources for the projects will be sourced within, adding that, local content materials will be used by the company as spelt out in the agreement.

According to him, “all our road projects across the state will be completed. You know rain will soon start now, we shall continue with our work, as all the roads will be laid with the final phase of asphalt.

“On the rail project, we have considered many things and we believe this will boost the economy of the state, considering both human and material wastage it would cater for, when in place.

“The journey from Abeokuta to Lagos that averagely last like one hour or thereabout and considering the gridlock, the time may go beyond speculated period, this would conveniently be less that 30 minutes with the light rail.

“We have considered our local artisans and workers, thus specifically maintaining that local contents must be given priority. All our quarries and suppliers of local materials will be directly involved through their various groups and associations and you know what, the economic value of the state will be on a high pedestal. This is what I want our people to understand.

“We want high quality projects that will stand the test of the time, the expertise must be contacted and our own people will be part of the execution of the project. It means they will be acquiring more knowledge on the field,” Amosun disclosed.

Speaking with newsmen, the Chairman of the Chinese Construction and Engineering Construction Company, CCECC, Mr Cao Baogang revealed that the state has been tremendously competing with the best cities in the world in terms of infrastructural facilities and economic drive.

The Chairman lauded the leadership role of the governor, hinting that, they are happy working with the Ogun State government.

Speaking exclusively with PMNews,the State Commissioner for Works and Infrastructures, Arch. Olamilekan Adegbite assured the people of the state of proper monitoring and timely execution of all projects in the state.

He confirmed that the project is between 3 and 3.2 billion dollars, adding that, it is not a time bound project.

He corroborated his submission with the position of the governor that the state will not accept anything less than quality and best work that will stqnd the test of the time.

Among the state government functionaries at the signing of the project were the Secretary to the State Government, SSG, Barr. Taiwo Adeoluwa, State Head of Service, Mrs Modupe Adekunle, Chief of Staff, Prof. Ganiyu Olatunji, State Attorney General and Commissioner for Justice, Mrs Jumoke Akeredolu.