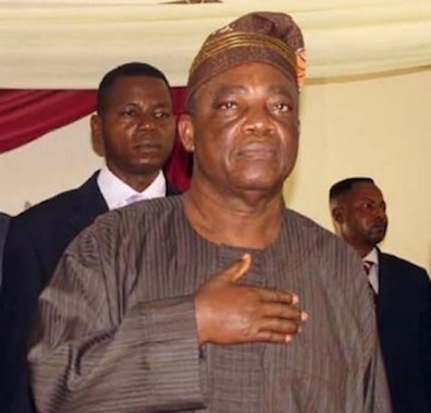 Ayo Fadaka, PDP state publicity secretary, in a statement, “commends the House of Assembly for its tenacity in prosecuting this action”. The PDP accused Olanusi of negligence in the discharge of his duties, working at cross purpose with Governor Olusegun Mimiko and nursing phantom ambitions of how he will covet the position of his boss”. This, the party describes as “dishonorable and treacherous”

It, also, commended the appointment of Lasisi Oluboyo as Olanusi’s replacement. Oluboyo, until now, was commissioner for agriculture, in Mimiko’s cabinet.

“The party takes absolute cognizance of the impeachment of Alhaji Ali Olanusi as Deputy Governor and commends the House of Assembly for its tenacity in prosecuting this action.

“It is important to declare that the Parliament displayed its commitment to good governance that will be bereft of undue encumbrances by removing from office a man who not only discharge his responsibilities with levity and mostly in abeyance, but also view with disdain his oath of office to bear true allegiance to the government he was an integral part of. This attitude is unbecoming of a senior citizen who should ordinarily serve as a shining example to younger generations who look up to him for inspiration,” Fadaka said.

He noted that: “The concept of Gubernatorial Candidates having running mates as enshrined in the Presidential system of Government indicates that a Governor must have loyal and trust worthy Deputy that will view issues from the same perspective as his boss and work in unison with him in all ramifications.”

“Thus the moment Ali Olanusi decided to chart a new and independent course for himself, he should have honorably resigned from office, rather he began to nurse phantom ambitions of how he will covet the position of his boss, this to say the least is dishonorable and treacherous.

“With the impeachment of Olanusi and his replacement by Alhaji Lasisi Oluboyo, who until his appointment was a Commissioner in the administration, Government will continue to power on seamlessly and progress will continue in our state.

“We however want to assure the people of our State that peace will continue to reign here. They must therefore discountenance all the uninformed threats to the contrary as Nigeria is in a democracy that is thriving and orderly,” the statement read.