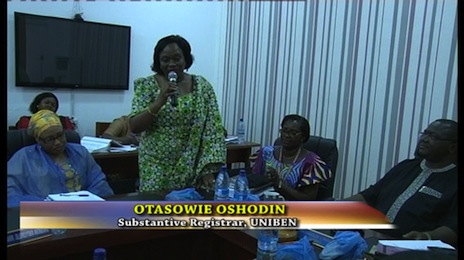 Wife of the immediate past Vice Chancellor of University of Benin (UNIBEN), Mrs. Otasowie Oshodin, has been appointed Registrar of the university.

The appointment of Mrs. Oshodin which was announced on Monday by the Governing Council of the University, will however take effect from 7 May, 2015, when the tenure of the incumbent Registrar, Dr (Mrs) G.O. Ogboghodo will expired.‎

“Mrs Otasowie Oshodin, spouse to the immediate past Vice Chancellor of the University, Prof.O.G.Oshodin (JP) brings to the job vast experience gained as Deputy Registrar, Council and Committee, Deputy Registrar, Staff Training and Labour Relations, her immediate last posting, amongst several others.”