Prophet Flees From Court In Lagos 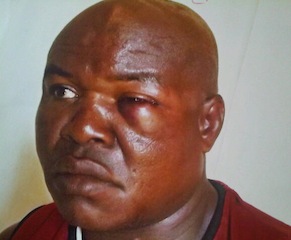 The Okada rider, Chika Izuogu, brutulize by the prophet for refusing to pay money for deliverance

There was drama at Ejigbo Magistrates’ court, Lagos State, western Nigeria, when self-professed prophet, Destiny Onwudinjo, who was facing criminal trial suddenly jumped from the dock and ran out of the court.

The prosecutor, Mr Femi Adeleye, and some of the court officials ran after him and re-arrested him along the street.

His action disrupted the court’s proceedings as the litigants rushed out of the court due to the rowdiness that ensued.

Prophet Onwudinjo was arrested by the police at Shasha Division for brutalising a commercial motorcycle rider called Chika Izuogu for refusing to pay him N120,000 for deliverance prayer.

The incident happened at Olukosi Street, Shasha, Lagos where both of them reside.

According to Izuogu, Onwudinjo told him that he had a revelation from God that he needed to embark on seven days deliverance prayer so that his condition would improve for the better.

Enugu State-born Onwudinjo explained to him that the money he asked him to pay covered the fasting and other spiritual materials he would use for the deliverance.

To convince Izuogu that the prayer will work after seven days, he told him that he will receive a divine blessing from God as an unknown person will give him N3 million he would use to start a new life and become rich.

Abia State-born Izuogu who seemed to be convinced told Onwudinjo that he would do the fasting by himself because he had no such amount to give him.

Izuogu said he held him and raised an alarm which attracted neighbours who contacted the police that arrested him.

After investigation, Onwudinjo was charged to court with attempt to obtain money under false pretence and assault.

It was while in court that he bolted.

When he was re-arraigned, the presiding Magistrate, Mr Peter. E. Nwaka ordered him to be remanded in prison custody at Kirikiri.

The court also directed the prosecutor to prepare another contempt charge against him for escaping from the court.