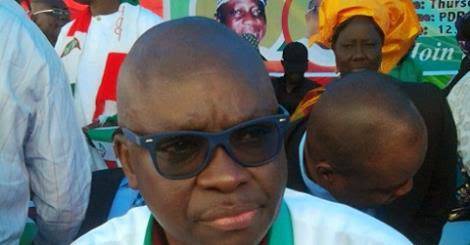 Ekiti State Governor, Mr Ayodele Fayose, has made a U-Turn from his hardline posture over the crisis in his state by expressing commitment to the peace move initiated by elders in the state.

The peace move led by Chief Afe Babalola (SAN), is to find a lasting political solution to the crisis between the two factions in the State House of Assembly.

Governor Fayose said in a statement personally signed by him that he was committed to the peace meeting scheduled to hold on Thursday at the Afe Babalola University, Ado Ekiti, adding that “the peace of Ekiti State is far and above all other interests and therefore everyone should support the elders peace
efforts.”

The statement read: “Ekiti elders under the leadership of our highly respected legal icon, Aare Afe Babalola (SAN) called a meeting between the two factions of the State House of Assembly to resolve politically the crisis in the House of Assembly and I, as the state governor does not have any objection because the peace of Ekiti is far and above all other interests.

“The meeting is scheduled to hold at Afe Babalola University, Ado Ekiti at 11a.m. on Thursday.

“I, therefore, call on everybody to support this peace move and no one should do anything to undermine it.

“Knowing how agitated and concerned the people of Ekiti have been on this crisis, I wish to urge our people to give this peace effort a chance and I urge all security agencies in the state to see to it that adequate security is provided before, during and after the meeting.

“I thank Ekiti people for their unflinching support for the government and appeal to them to continue to maintain peace, bearing in mind that no society can progress in an atmosphere of rancour.”

Since he was sworn in as governor of the state on 16 October last year, Fayose has been having a running battle with members of the state House of Assembly elected on the platform of the All Progressives Congress, APC.

Matters came to a head when 7 lawmakers purportedly impeached the Speaker, Dr Adewale Omirin and 18 other members of the state House of Assembly and elected their own speaker.

Fayose and the factional lawmakers made the state too hot for Omirin and his 18 colleagues and they fled to Lagos last year.

They immediately served a notice of impeachment on Fayose. The outrage that greeted the plan to impeach Fayose has thrown the state into crisis with
stakeholders calling for an end to impunity and lawlessness in the state.