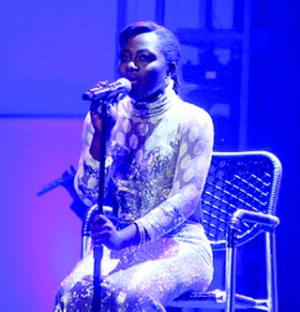 The three celebrity judges on the Nigerian Idol Season 5 TV reality show, Darey ‘Art’ Alade, Yinka Davies and Dede Mabiaku at the weekend returned one of the six previously evicted contestants, Sther, to the show, thus using up their last window of opportunity to bring back on the show any of the previous evictees.

Show anchor, Illrymz announced the judges’ decision at the weekend amidst cheers and applause from the audience who had gathered inside the OMG Dream Studios for the third Gala Show in the Top 12 series.

Sther would be riding her luck on the show for the second time running following a similar intervention at the group stage which saw her returned alongside Modele and P.Scholes on the bill of the Judges’ Wild Card.

Alongside P.Scholes and Uloma, she had polled the least number of votes and was accordingly expected to exit the show, but for the lifeline from the judges which now guarantees her a chance to compete for the multi-million naira top prize.

Meanwhile, all the seven contestants are up for the next round of eviction through the public voting process to determine the eventual winner of the N7.5 million top spot cash prize as well as other multi-million naira juicy offers chief among which include a recording deal with South Africa-based Universal Music label and a new Sports Utility Vehicle (SUV).

The seven took to the stage at the weekend on the theme Broadway week to showcase their craft in music and attempt to curry the favour of the voting public whose votes determine who gets evicted or not. Their performances featured solo renditions as well as duets accompanied with some theatrics. It appeared the night was going the way of the ladies as the quartet of Preye, Dolu, Brenda and Sther had memorable solo performances, but Classic Tunez, who performed Tomorrow by Annie and K-Peace who did Can You Feel The Love Tonight, a song from the movie The Lion King were enough to restore some pride. The third male contestant, Nex2 was re-assuring with his all-energetic and positive performance of Annie’s This is Your City.