Buhari to spend N4.1trillion in first day as president - Oyegun 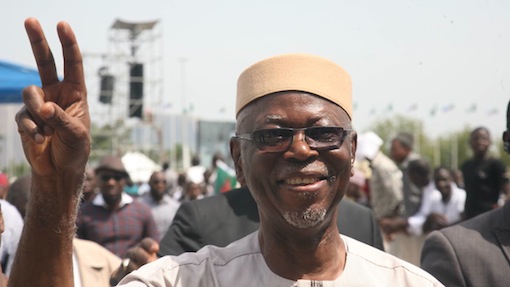 The National Chairman of the All Progressives Congress, Chief John Oyegun has said today that Nigeria’s president-elect, Muhammadu Buhari will have to spend N4.1 trillion on servicing debt, paying salaries and making oil subsidy payments.

Oyegun in his speech titled, ‘Extraordinary Times Require Extraordinary Action’, noted that in highlighting the financial burden the party would inherit, he was not making excuses or lamentations. He was merely laying bare the ‘the enormity of the challenges ahead’.

“From the first day of this government, a total of 4.1 trillion Naira will be required for sundry expenses, including oil subsidy payment, arrears of salaries at federal and state levels and debt servicing, just to mention a few,” he said.

Oyegun then stated that the incoming government was going inherit enormous debt. “Put this against the background of the falling oil prices, the unprecedented 60-billion-dollar debt which the outgoing government has left for the incoming one, the largely depleted Excess Crude Account (ECA), the 60 billion dollars that have been lost in the last four years to crude oil theft (and which are perhaps still being lost as we speak), the need to rapidly create jobs for our teeming army of unemployed youths, enhance the security of the citizenry and improve the economy, and you will begin to understand the enormity of the challenges ahead.

“This is not a lamentation forum, but still, we must tell ourselves the truth about the state of the nation, and the expectations of our people.”

“In fact, to a number of our compatriots, by May 30th, a day after the swearing of our president-elect, all the streets in Nigeria will be air conditioned while electricity will become stable and fuel scarcity will be a thing of the past.”

“Yes, we will get there, but it won’t happen overnight.”

“The incoming President, more than anyone else, needs the support and cooperation of the 8th National Assembly to fulfill his campaign promise to Nigerians.

“You may be required to pass important bills at very short notices. This will not be unprecedented but will require a buy-in to the programmes of the President and the Party and a willingness to work with him and the party for the benefit of all Nigerians. The demands on you will be tasking, but you are up to the task! Fortunately we have the numbers, even though we believe that a bipartisan effort – to which we are open – will be a better deal,” he explained.

He noted that: “There is good news! You, our Senators-elect, share in the dreams of the President and our party to make our country great again. May I also remind you that all eyes will be on our party – and by extension on all of you – to see if our government will walk its talk in terms of running a lean and effective government, one that eschews waste, corruption and indiscipline, and one that will harness the nation’s human, material and natural resources for the well being of the people.

“Finally, let me end on a note of caution. There is no magic wand to make our economy better overnight. Against the realities on the ground, some of which I listed earlier, reviving our economy will be a long and tortuous process. Bold decisions will need to be taken, and this can only be possible if there is a synergy among our party, the National Assembly and the President. We know you will not fail us, and you will not fail Nigerians.

“Well, the 1921 Nobel Laureate for Physics, Dr. Albert Einstein, must have had a moment like this in mind, while responding to a question.

He was asked: “Dr. Einstein, why is it that when the mind of man has stretched so far as to discover the structure of the atom, we have been unable to devise the political means to keep the atom from destroying us?”

His answer: “That is simple, my friend. It is because politics is more difficult than physics.”

“Now that you know the nobility of the calling in which you have found yourselves, I am sure you will not hesitate to show that politicians too can solve problems!”