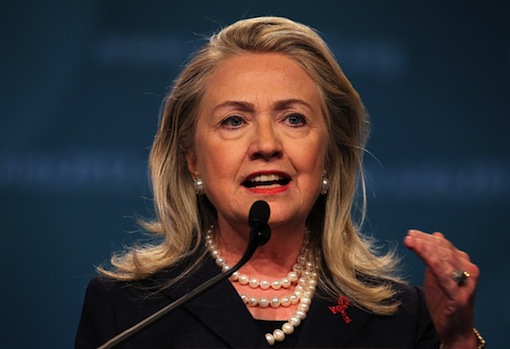 Washington (AFP) – Only hours before Hillary Clinton was to face her biggest challenge and tragedy as US secretary of state, she asked an aide to get her a French documentary about Libya.

“Can you get us a copy of Bernard Henri-Levi’s (sic) film about Libya. I think Harvey made it and it showed at Cannes last spring,” the then secretary of state wrote to her trusted friend and confidant Huma Abedin at 5:50 am on September 11, 2012.

Later that day heavily armed militants stormed the US mission in eastern Benghazi, killing four Americans in a gunbattle that raged for hours.

The attack triggered a crisis which would roil the 2012 White House elections and could threaten to overshadow Clinton’s own bid to make history by being elected America’s first woman president in 2016.

The request to Abedin was among 296 emails released by the State Department on Friday out of 30,000 that Clinton has turned over after revealing that during her 2009-2013 tenure she had used a private server and email address.

All the emails released on Friday deal with Libya and the September 11, 2012 Benghazi attack.

And they offer a small, but unprecedented insight into Clinton’s personal life, her daily work at the Department and how she handled the tragedy which caused a convulsion of grief in the close-knit diplomatic community.

Many emails contain condolences from her staff for the deaths of ambassador Chris Stevens and the three other Americans, as well as from Netanyahu, and former defense secretary Bob Gates.

“I know it has been a hard week for you, and I wanted simply to express my sympathy and tell you I was thinking of you,” Gates wrote.

Others are more fawning, thanking the boss for her leadership, and in particular the remarks she made at a ceremony when the bodies were brought back to the US.

In one missive, Clinton admits that on the Saturday after the attack she overslept and missed a presidential briefing. “I just woke up,” she wrote.

Her aide sends her a list of calls for that day starting from noon with a call to then British foreign secretary William Hague, and packing in seven more world leaders every 15 minutes, including Israeli Prime Minister Benjamin Netanyahu and ending at 2:30pm with then Turkish foreign minister.

The emails also show concern for how Clinton’s image was holding up in ensuing political storm, with her foreign policy advisor Jake Sullivan assuring her she never referred to “spontaneous” demonstrations.

That was the description offered by national security advisor Susan Rice on the Sunday talkshows which Republicans seized on as proof that the administration was covering up the true circumstances of the attack.

In October 2012, Abedin emailed to ask Clinton to call one of the diplomatic security officers injured in the Benghazi attack.

But she adds that someone has been putting together a collection of clothes “3 nice gowns, a lot of blouses and jackets” for Clinton to try on during a visit to New York.

Towards the end of 2012, Clinton asks how the Benghazi hearings are going and apologizes to deputy secretary of state Tom Nides that she won’t be able to accompany him after suffering a bad fall.

“So I’ll be nursing my cracked head and cheering you on as you ‘remain calm and carry on,'” she wrote.

“What doesn’t kill you, makes you stronger (as I have rationalized for years) so just survive and you’ll have triumphed.”