Edo council chairman dies after protest for his removal 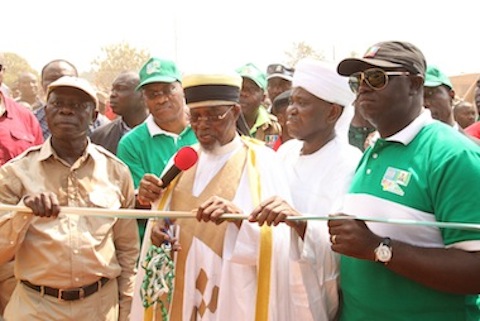 Kadiri who died on Friday evening at the University of Benin Teaching Hospital (UBTH), at the aged of 54, passed on just few hours after some youths protested to the Council secretariat, demanding for his removal due to ill health.

The youths were said to have stormed the secretariat with placards and disrupted activities, claiming that the ill health of the late council boss was impeding development of the locality.

Some of the protesting youths alleged to be students of Federal Polytechnic, Auchi, were arrested by the police while others escaped.

Following this development, authorities of Auchi Polytechnic promptly suspended the Student Union President, Sani Kasil Abdulqadiri, over the alleged involvement of the Polytechnic students in the protest.

The Polytechnic Public Relations Officer, Oshiobugie Mustapha, who confirmed the incident, said that the SUG President was queried because the SUG bus was found at the venue of the protest.

“The school is on holiday we are resuming on the 24th of May. The vehicle belonging to SUG was found at the scene of the protest. He should explain how the vehicle got there. Students who were there should be made to face disciplinary action,” he said.

The Vice Chairman of the Council, Alasa Mohammend Idaro, who was accused of being the brain behind the protest, allegedly escaped being lynched by supporters of the late Kadiri.

Idaro was said to have lobbied for the removal of late Council boss due to ill health. It was however disclosed that the state Governor, Comrade Adams Oshiomhole, had called to assure the late Kadiri of the support of the state government, since his ill health had not affected his official duties.

Younger brother of the late Council boss, Prince Suleiman Kadiri, described the death of his brother as painful and sudden.

Meanwhile, the remains of the late Kadiri have been taken to Auchi for burial according to Islamic rites.