Jonathan, Osinbajo worship in Abuja together 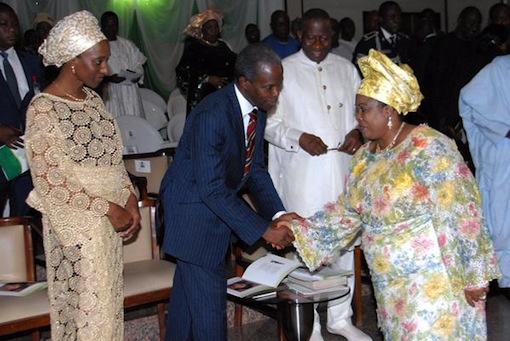 President Goodluck Jonathan and Vice President-elect, Professor Yemi Osinbajo on Sunday, May 24, worshipped at the National Christian Centre, Abuja as part of the 2015 Presidential Inauguration service for the Nigerian Christian community.

The interdenominational inauguration service at the National Christian Centre also doubled as a Presidential Thanksgiving service for out-going President Goodluck Jonathan and his wife, Patience, who was in attendance with some members of his cabinet.

The theme of the service was “Give Thanks in all Circumstances.”

The service was well attended as the venue was full to capacity. In attendance were representatives of most Christian denominations, women groups, communities, voluntary organisations and students representing many educational institutions in the Federal Capital Territory, FCT.

The choir of the host organization, the Christian Association of Nigeria, CAN, rendered several popular and interesting Christian songs that entertained the congregation so also the Bayelsa State Choir and the Port Harcourt Men’s Ensemble.

The first reading at the service taken from Isaiah 62: 1-7 was taken by out-going Senate President, David Mark, while the Vice President-elect, Mr. Osinbajo, took the second reading from the gospel according to Luke 17: 11-19.

In his sermon at the service, Nicholas Okoh, the Primate of the Anglican Church of Nigeria, called on Nigerians not to despair no matter the state of affairs in the nation, but to daily endeavour to count their blessings and give thanks to God. His message substantially dwelt on the theme of forgiveness by Nigerians for one another and for the leadership who might have disappointed in their stewardship, adding that it is only a free conscience, not burdened perpetually by guilt that move the nation forward as God, our creator, always readily forgives sinners.

He urged Nigerians to support the incoming Buhari government and to allow it time to put in place the changes and prosperity they would want to see.
Prayers were held by select Christian churches for the incoming and outgoing leaders and their families as well as the various arms of government.
Also present at the service were the wife of the Vice President-elect, Dolapo Osinbajo; National Chairman of the All Progressives Congress, John Odigie-Oyegun; former Head of State, Yakubu Gowon; Secretary to Federal Government, Pius Anyim; and a number of ministers of the government. Sam Nda-Isaiah, an APC stalwart and Ayo Oritsejafor, President of the Christian Association of Nigeria (CAN), were also present.