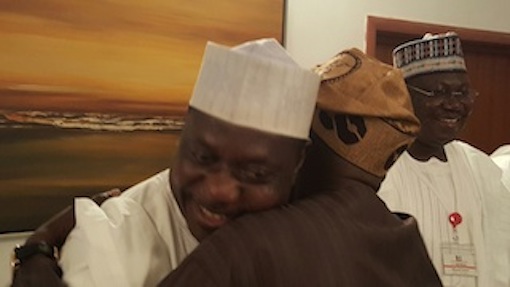 The All Progressives Congress (APC) Unity Forum has stated that the party’s senator-elect are yet to elect a Senate President, contrary to reports in the media and on social media.

In a statement issued today and signed by Senator Robert Ajayi (South West); Senator Bukar Abba Ibrahim (North East); Senator Barnabas Gemade (North Central) and Senator Abu Ibrahim (North West) it said: “Given the conflicting media accounts surrounding the issue of the prospective candidate for the Senate presidency from the APC, we of the Unity Forum are constrained to make this clarification. This response has become necessary because we do not want to portray our party as a collection of desperate, indiscipline and selfish people. Rather, we believe that party preservation and the overall interest of the party should be paramount at this point.

“For the records, there was no time before the retreat, during the retreat or after the retreat where and when the issue of a primary election to pick the Senate President was tabled or agreed upon. Nowhere in the party leadership structure can we find the mandate for the conduct of any election with regard to the emergence of the Senate Presidency candidate. Any contrary information, out there in the social or any kind of media is false, self –serving and intended to mislead the public.

“As far as we know, the National Chairman of the party, John Oyegun gave the advice that we all meet in an effort to build a consensus among the different camps towards finding an harmonious solution. That was how far it went. There was no election that was called. It was now left for the APC members at the retreat to internally bond together to find a workable solution. To this end, different caucuses met from the entire geo-political zone to discuss the candidacy of those contending for the Senate Presidency.”

The forum noted that: “After the caucusing, the members of the Unity Forum comprising of Senators from the North East, North Central, North West and South West reached a resolution to support the Senator Lawan Ahmad and Senator George Akume ticket for the Senate President and Deputy Senate President respectively. This collaboration is encompassing and accommodating of all the tendencies within the party in the overall interest of the party and Nigeria. Presently, about 37 senators have agreed to the Lawan/Akume arrangement. We decided to disclose this to check the falsehood flying around.

“What we are trying to do is to make things easy for the party by putting the interest of Nigeria first. In the light of the above, we wish to state expressly that the effort to convince more senators to participate in the consensus building within our party is ongoing. We recognize the discretion of each senator to vote any candidate.

“We affirm the supremacy of the party while the interest of the country must be paramount. We cannot blame anyone for personal ambition but such ambition cannot be superior to the stability, credibility and cohesiveness of the National Assembly. Thus, we subscribe to the notion that we must work with and within our party, APC to resolve any contentious issue.

“The alliance forged by Senators Lawan and Akume alongside other members offers the APC the best window of opportunity to resolve the issue of the Senate presidency and take to a higher standard from the legacy left by the 7th Senate of the Federal Republic,” the statement read.