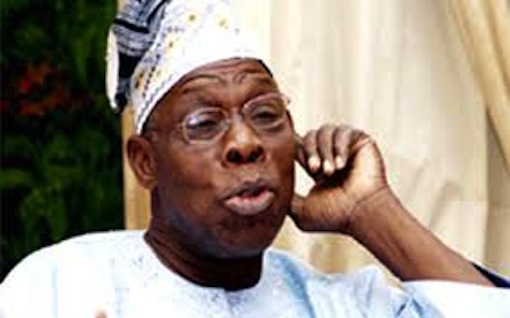 Call has gone to Nigerians both at home and diaspora not to relent in their prayers for the incoming administration in the country to be led by the former Head of State, General Muhammadu Buhari.

Former President, Olusegun Obasanjo made the call Sunday while receiving the women from the southwest, who visited him at his Abeokuta hilltop residence.

Obasanjo said that governance is not only for those who are the rulers but everybody’s duty.

“Let’s give Buhari some time,let’s support him with prayers and relate with him with support. Like you’ve said, it’s everybody’s duty, not only those who have governed before, all of us are keen about Nigeria,” Obasanjo said.

“Like you have come today, if you have an idea, raise it and I will try to pass it across to the incoming President. It is also important to share those ideas with the governors.

“I have said it to the incoming President, the expectation is very high, but at the same time, there’s a lot of goodwill, internally and externally and once the incoming administration realizes this and takes every step, particularly, in the first three months when the people would be watching and counting, I think for me, we would get there.

“One of the good things about the incoming President is that he is not a green horn, he is not a novice, he has done it before, it might be under a different circumstances.

“There’s something very important that I observed, the incoming President has a lot of experience. He is not a green horn, it is not as if he hasn’t been into power before, he is experienced, he knew what we did to turn things around, even when we were there together during the military regime, we did it together, and it was as a result of our performance that we were invited to do it again.

“What I would say is that we should all put our minds at rest, he is someone that would perform, but we must exercise patience, ‎because what has been destroyed for eight years can not be undone overnight.

“But like the Chinese proverb, ‘the journey of a thousand miles starts with a step’, it is not only first step, but first step in the right direction because if you take a wrong step, you are not likely to get to the destination,” Obasanjo posited.

Obasanjo declared that two things stand Buhari out, which made him to believe that the country will come alive again.

“I believe there are two things the incoming President appreciates, the expectation is very high. I believe he understands that and I believe he shouldn’t be frightened by it because once you’re honest with Nigerians, Nigerians would follow you, don’t be too clever with them, don’t deceive them, don’t cover up, don’t be an ostrich.

The former Chairman,Board of Trustees of the Peoples Democratic Party,PDP however promised to deliver the message of the women to the appropriate quarters as he did the last time they came before the elections.

He promised that better days are ahead of the country,reminded them of similar situations when he came into power in 1999.

“When you meet me before the elections, there was a very important issue you discussed with me, I raised the issue with the concerned authority and I got a reply that it would be addressed, and I am sure the issue has been addressed.

“All you have mentioned again here today, we must all look at it together. The situation was like this when I took over in 1999,‎ no light, no fuel, but it didn’t take us so long before the issues of light and fuel were resolved.

“It is not me alone, all of us should advice. There would be people ‎in government, but we all need to help them until they say, ‘we know too well, don’t help us’ and when they said that, we will put our mouth one side, put our hand one side and say, ‘God help them’,but government and having input in it, is the responsibility of all of us‎,” Obasanjo disclosed.

Speaking earlier,leader of the women and the Iyalode of Yorubaland, Chief Alaba Lawson lauded Obasanjo for his fatherly role to Nigeria.

She appealed to him not to refrain from offering quality advice to the in – coming administration as it set to take the reins of power in few days time.

The women’s leader disclosed that Nigerians are in agonies over fuel crisis, unemployment, insecurity among others, urging the former President not to abandon Buhari in the onerous task to make Nigerians proud again as two good heads are better than one.