Only 6 of 275 rescued females are pregnant, says NEMA 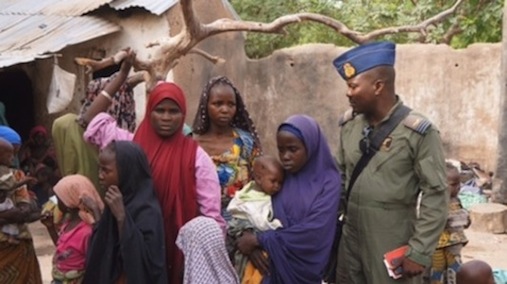 FILE PHOTO: A Naval personnel takes a pose with some of the rescued women and children

The Director-General of the National Emergency Management Agency (NEMA), Mr Muhammed Sidi, has said that only six of the 275 females rescued from the Sambisa Forest in Borno are pregnant.

Speaking at an interactive forum organised by a non-governmental organisation, 1 Nigeria Initiative, in Abuja on Sunday, Sidi said the speculation that most of them came out with pregnancy was not correct.

“I must put it on record that only six of them came with pregnancy and we must be very careful not to stigmatise these innocent Nigerians.

“This is necessary so that we do not end up stigmatising the child that is yet unborn. I think we must respect their rights,” Sidi advised.

He said that 70 per cent of the rescued females were children below five, while 63 of them could not identify their relatives.

“It is a terrible situation to have children under five unaccompanied, meaning that they have lost their parents and we cannot link with their parents at the moment,” he said.

Sidi said the women had been profiled by the military and confirmed as posing no security threat, having been innocent Nigerians seized by the Boko Haram insurgents.

He said that there were six camps otherwise known as “residential camps” in Yola in Adamawa holding 27,000 internally-displaced persons while another 200,000 were living in communities.

He said the agency had 14 camps at the beginning of 2014 in Adamawa alone.

“But most communities under the occupation of Boko Haram have been recovered and peace has returned, so the displaced persons are beginning to move back to their various communities,” Sidi said.

The NEMA boss commended the military for the successes so far recorded in the fight against the insurgency.

He also commended the UN, the Red Cross Society and non-governmental organisations, which had assisted in handling the displaced persons in Gombe, Adamawa, Borno and Yobe states.