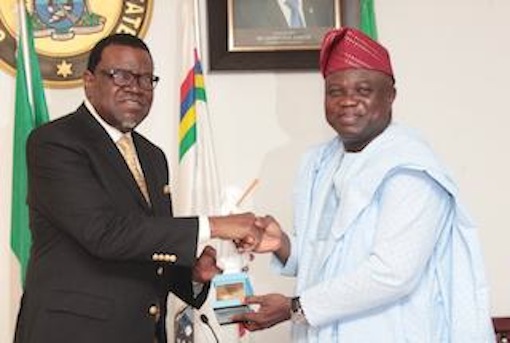 He who arrived Lagos in the company of his Madame Monica Geingob said Lagos should the first place of call for investors across the globe.

Geingob who was in the country for the inauguration of President Muhammadu Buhari said that the economy of Lagos has capacity for expansion.

Ambode told Geingob that he was a firm believer of African Renaissance and that African Countries should have a meeting point that will enable them explore the economic potentials of each other.

In a statement by Habib Aruna, Chief Press Secretary, Ambode reiterated his plans to create an Office of Overseas Affairs and Investment (LAGOS GLOBAL) in the state which according to him, would render assistance to people from other countries who may require information to invest in the state, thereby, attracting Direct Foreign Investments to the state.

He said his administration is interested in tourism, entertainment and arts and can collaborate with Republic of Namibia which is also a hub for tourism and entertainment in Africa.

In his remarks, the Namibian President, Dr Hage Geingob congratulated Lagos state for the successful transfer of power, stating that, a similar transition also took place in Namibia recently which brought him to power.

He called for greater collaboration between Lagos State and Namibia adding that just as it happened in Nigeria on Friday, it also took place in his country not too long ago.

While describing Nigeria as the power house of Africa, the Namibian President said African interest is on Lagos because of its potentials, size and long history of commerce.