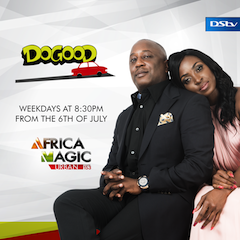 The new sitcom, which also features appearances from other popular comic actors including Tony Akposheri and Yibo Koko, will be available on the Africa Magic Urban channel.

Do-Good, a spin-off of a popular Nigerian drama series of the 1990s, features the exploits of the titular character Do-Good, played by Basorge, who returns from a sojourn abroad to woo his sweetheart Emem played by Kate Henshaw.

Speaking on the new show, Wangi Mba-Uzoukwu, Regional Director, M-Net (West Africa), said Africa Magic continues to lead the way in creating and showcasing the best content made by Africans for Africans.

She noted that Do-Good is the latest in a line of exciting content that continues to appear on their channels.

“Besides being a stellar comedy series, Do-Good also tells a story of love and ambition and focuses on the struggles of the ordinary man. It is a humorous depiction of real life situations and definitely promises to be a hit with all lovers of comedy and good television,” Mba-Uzoukwu said.

John Ugbe, Managing Director, MultiChoice Nigeria, said Do-Good is a great example of his company’s ongoing partnership with the Nigerian entertainment industry, and “it expands our already impressive list of exciting and fun programming for viewers to choose from.”

Do-Good is the latest addition to the thrilling content line-up which recently launched on the various Africa Magic channels in 2015 including the telenovella, Hotel Majestic, and the popular late night talkshow, Highlites with IK.