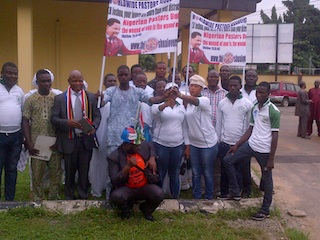 Members of TB Joshua's Church this morning in court

The Coroners Court investigating the building collapse within the premises of the Synagogue Church of All Nations, SCOAN, today recommended that the contractor who built the guest house should be investigated and tried for criminal negligence.

The coroner also amongst other things recommended that the church be investigated and tried for not obtaining necessary permit before constructing the building which collapsed and killed 116 person who were mostly South Africans.

The Coroner presided over by Chief Magistrate Oyetade Komolafe called for investigation of the church and that the relevant authorities should carry out detailed fitness test on all the structures within the premises of the church.

In his recommendation, the Oyetade also ordered that the structural engineers that oversaw the construction of the collapsed building, Engineer(s) Oladele Ogundeji and Akinbela Fatiregun of Hardrock Construction Co Ltd should be tried for criminal negligence by the relevant authority.

It would be recalled that the six storey building which collapsed on September 12, 2014 killed 116 people, of which 85 of them were South Africans, 22 Nigerians, 2 Benioise and 2 Togolese nationals.

While giving his recommendations, Oyetade pointed out that it would be erroneous for the coroner’s court to rely only on the evidence of the medical experts there is need to also take into consideration the evidence of other experts for the issue to be properly adjudicated.

Continuing his recommendations, the Coroner also said that CSP Haruna Alaba, the Divisional Police Officer, Ikotun Police Station should forthwith be transferred from the said Ikotun Police Station because he failed to take note of what was happening in his area and had to rely on information from the. Police headquaters.

While giving the summary of his findings, Oyetade pointed out that the death of victims of the collapsed building was consistent with blunt force trauma that would normally be sustained from a collapsed building.

“Structural failure due to the combination of designs and detailing errors caused the building to collapse,” he held.

He also pointed out that the alleged aircraft which SCOAN claimed hovered over the building minutes before it collapsed was not the cause of the collapse of the building.

The Coroner also held that SCOAN did not obtain the relevant building permit/approval from the Lagos State Government in respect of the collapsed building, adding that the foundation failure is a remote cause of the collapse of the six storey building.

Oyetade while calling out the names of the victims and giving specifics on the cause of death of the 116 victims, 60 of which were males, 56 females including a six year old child, said that the time of death for all the victims was 12.30 hrs. He also pointed out that six of the victims are yet to be identified.

He noted that most of the victims sustained various injuries ranging from haemorrhage, loss of limbs, crushed bones, multiple rib fractures, perforation of the lungs, destruction of left tibia vessels, strangulation, and chest wounds.

The inquest which started on the 13th of October 2014 called a total 32 witnesses and tendered a total of 45 exhibits.