Kenyans ready for nude protest ahead of Obama visit 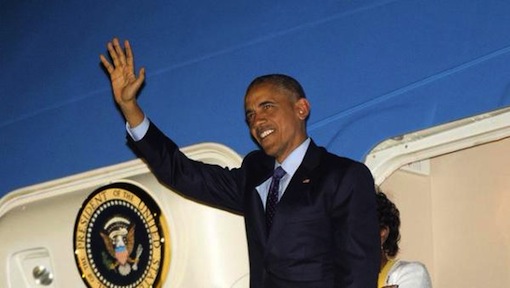 Kenya’s Republican Liberty Party has notified the of police its intention to mobilise 5,000 men and women to protest naked against President Barack Obama’s “aggressive support for homosexuality”.

The party said it has already notified the authorities for protest scheduled to hold on July 22 and 23, coinciding with the US president’s visit to Kenya.

Vincent Kidala, the party’s leader, wrote to the Police on Monday to notify the authorities of the planned protest march from Nairobi’s Freedom Corner to the streets of the capital.

He said the protest would involve “totally naked men and women” to “demonstrate the difference between men and women.

“The procession shall be carried out by approximately 5,000 totally naked men and women to protest the President Barack Obama’s open and aggressive support for Homosexuality.

“The party’s main objective is for him to understand the difference between a man and a woman,” he said in the letter to the Police.

At least 1,000 commercial sex workers from Nairobi alone have confirmed their participation in the nude protest march and the party is continuing to mobilise politicians to join the protest march.

“Homosexuality is not new to the party,” Kidala said, adding that, “we forwarded a Bill to Parliament in 2013 seeking to ban same sex marriages but we have not received any notification of progress.

“There is a lot of interference from the US government on this issue,” he said.

Obama is due in Kenya on July 24 to attend the Global Entrepreneurship Summit (GES).

A White House Spokesperson, Joshua Earnest, said last week the US President planned to address the issue of gay rights and the need to protect gay rights during the visit to Kenya.

Kenyan religious leaders have stepped up a campaign to urge Obama to drop the gay rights subject matter.

“We shall say to the US perish with your dollars. From the word go, African traditional religion never recognised homosexuality. Homosexuality was never part of this continent,” one religious leader said.

The White House insists Obama would not hesitate to make it clear that the protection of gay rights is a fundamental human right that every state must undertake.

Obama is also expected to address parliament during his visit to Kenya with Speaker of Parliament, Justin Muturi, saying the parliament would respond to “advances perceived to encroach on our social fabric.”

However, the Kenyan Presidency said the U.S. President was at full liberty to champion the gay rights in respect to the US Supreme Court ruling.

“We want to catch President Obama’s intervention on this issue during his visit,” Kidala said.