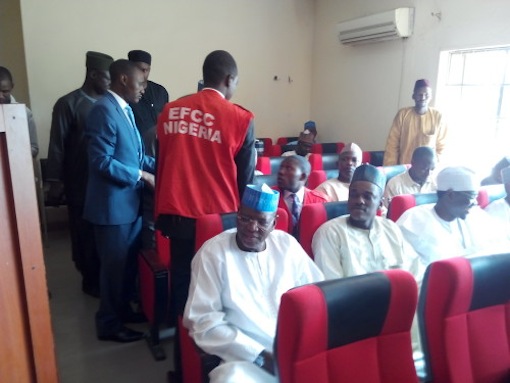 Sule Lamido and his sons in EFCC custody

Sources at Kano Central Prison confirmed to PM News Correspondent on Monday that the immediate past governor of Jigawa state, Sule Lamido and his two sons, Mustapha and Aminu left their facilities late Monday morning to Abuja.

“They were taken away few minutes past 10 this morning. We were not told where they were being taken to, but I believe they are being taken to Abuja where their case will continue,” a worker at the Central Prison who craved anonymity told our Correspondent at the gate.

Earlier Director of Press to the former Governor, Umar Kyari told our correspondent on phone that lawyers to the embattled politician are working out modalities to secure bail for the Lamidos in a Federal High Court in Abuja to be presided over by a Vacation Judge.

However, our Correspondent authoritatively gathered Monday evening that all is set to secure the freedom of Sule Lamido and his two sons who were arrested by the Economic Financial Crimes Commission, EFCC, on a 28-count charges bordering on money laundering, abuse of public office and subtle bribery, amounting to N1.351 billion.

She adjourned the case to 28 September for formal trial.

A call to Dutse, Jigawa state capital revealed that already, supporters of the former Governor are planning big for his freedom expected to come tomorrow (Tuesday).