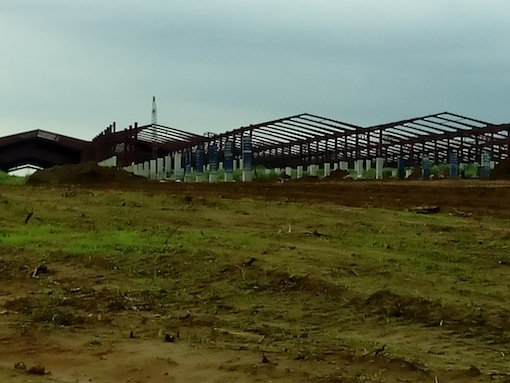 In a bid to build the largest church auditorium in the world, The Redeemed Christian Church of God may be heading towards serious dispute with nine villages that have written petitions to international organisations, media houses, corporate organisations and the court in Nigeria over the seizure of their land by the church.

In the statement, Oladele Benjamin Adisa, speaking on behalf of the villages, said: “The affected families are the 3rd, 4th and 5th generations of the earliest settlers in the nine villages over 200 years ago on the vast land purportedly acquired by the church, which owned by Otetumo Agbabo Shoole Agufon and Ososanya families of Itunmeko area in Ikorodu, Lagos State, with Pastor Amos Oshin and Chief Sikiru Ososanya as the heads of the two families respectively.”

“People representing the Redeemed Christian Church of God recklessly demolished and destroyed markets and stalls in front of the Local Government School Agunfoye–Remo. The old and new buildings at Zion African Church, Agunfoye set up in 1925 by the earliest settlers, cemeteries and all graves in the nine villages were also demolished.”

He noted that they could not take pictures of the demolition because policemen and security operatives that accompanied the church were shooting into the air to scare the villagers.

Adisa explained further that in a suit filed in Court 3 Sagamu HCS/105/14 by the said land owners against the church, it noted that the church have exceeded the acquisition of 1,900 acres sold to them. “It was however noticed that the church has already exceeded the boundaries sold to them to almost 4,000 acres. Immediately this was noticed, the church went in for the kill the next day, demolishing properties, cash and food crops which are the principal source of income for the villagers.”

According to Adisa, “we lost everything. We just want them to stick to the initial 1,900 acres. Now, come to think of it, the only public primary school in the community, known as Local Government Primary School Agunfoye Remo was demolished, thus denying the children in the nine villages the opportunity to attend school for the 2014/15 academic year. This unfortunate situation was reported to the Ogun State Governor, Commissioner for Education and State Primary Education Board in Abeokuta.

“It is illegal for a church to displace the nine villages in a reckless manner. The only road that links the nine villages with Simawa-Sagamu has been blocked. The blockage has entrapped the entire village,” he noted, adding that, “they started constructing a road that leads to the auditorium and erected a signboard at the entrance of the road on which a bold inscription, ‘PRIVATE ROAD, NO TRESPASS’, was written showing that the villagers have no free access to their various houses.”

When P.M. NEWS visited the communities, there was no access road to the villages. You have to find your way through the construction site to get to most of the villages.

Adisa, while conducting journalists round the villages, affirmed that “the electric cables, poles and transformers that supplied electricity to the nine villages were dismantled and taken away, leaving the area in darkness.

They said since June this year, 16 of the villagers have died due to starvation since their principal source of income had been ruined while many are sick due to hunger and starvation as they cannot get out of the village.

According to one of the villagers, “it should interest you to know that since the last six months, agents and representatives of the church have been coming to the nine villages with police officers in mulfti carrying guns and using vehicles without plate numbers to terrorise the villagers to vacate the land, promising to expel everyone the next time they come here. And we are not sure what will happen to the rest of us. We are appealing to everyone to come to our aid and ask the church to stick to their 1,900 acres.”

All efforts to speak to the church leadership failed at the time of filing this report.

PM News correspondent was barred from accessing the leadership of RCCG by the Security Commander of the church who stated that the case was already in court.