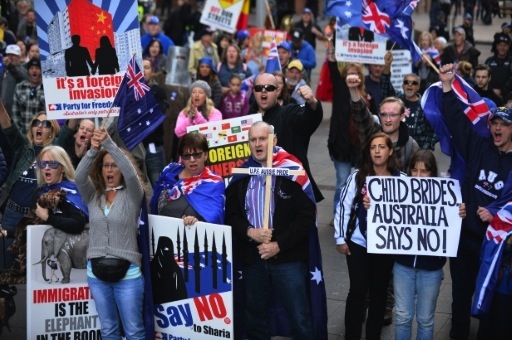 Sydney (AFP) – Rival anti-Islam and anti-racism rallies saw hundreds protest across Australia at the weekend with violent clashes in Melbourne, as police officers mounted a strong presence in cities Sunday to keep the two sides apart.

About 100 anti-Islam protesters from the Reclaim Australia and United Patriots Front groups waved the national flag and yelled chants at a rally in Sydney Sunday, with signs declaring “Say no to Sharia” and “Immigration is the elephant in the room”.

They were met by around 250 counter-demonstrators who carried banners including “No racism, no Islamophobia”.

Five people were arrested at the Sydney demonstrations, a New South Wales state police spokesman told AFP, with two expected to be charged.

There were some brief scuffles but no sign of the violence seen in sister city Melbourne on Saturday, where police had to use capsicum spray to subdue protesters.

“While there were a small number of people who chose to do the wrong thing, the majority of participants cooperated with police, which allowed for a peaceful demonstration,” NSW Police Assistant Commissioner Clarke said in a statement.

Reclaim Australia organisers said they were not racist but that the rallies were “a public response to the shock of recent atrocities of ‘Islam’s radicals’ both inside and outside of Australia”.

Government MP George Christensen told a Reclaim Australia demonstration in Mackay in northern Queensland state it would be naive to think his country was not at war with extreme Islam.

He added he was “sad” to see neo-Nazis at the Sydney and Melbourne rallies, the Australian Broadcasting Corporation reported.

Former politician Pauline Hanson — who rose to prominence in the 1990s as head of the right-wing, anti-immigration party she co-founded — told a rally in Rockhampton in central Queensland she was “against the spread of Islam”, the ABC reported.

“We have other different religions that have never been a problem in Australia,” she said, adding: “I’m not targeting Muslims — I’m targeting the ideology, what Islam stands for.”

There were also opposing rallies in the capital Canberra, western city Perth and Tasmania’s Hobart, with the anti-racism protests attracting the same number or more participants.

“Reclaim Australia” demonstrations were also held in April and attracted hundreds of people who said they were protesting against Islamic extremism.