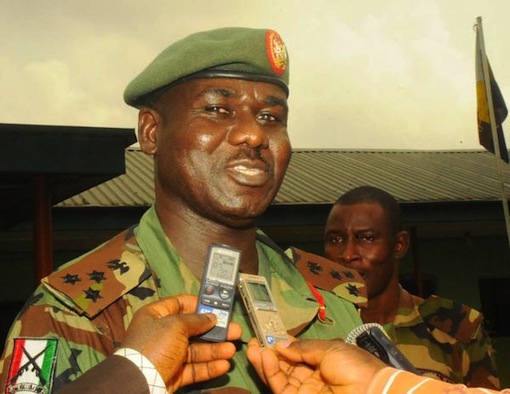 Maj.-Gen. Tukur Buratai, the Acting Chief of Army Staff, on Sunday launched “Operation Lafiya Dole” as a new code name for a fresh impetus by the military to tackle the activities of Boko Haram.

The new code name was derived from Hausa language, which literally translates “Peace by All Means”.

Buratai announced this while addressing troops of the 103 Battalion in Konduga, headquarters of Konduga Local Government Area of Borno.

He said that the objective was to transform the army professionally as well as fast track the war against the Boko Haram terrorists.

“It is the wish of the Federal Government to end this terrorism quickly in this part of the country and indeed some other challenges in the South South and other parts of the country.

“This will make us to have a very peaceful country free from any insecurity,” Buratai said.

He lamented that the fight against terrorism had lasted for a very long time without much results.

“Consequently as from today July 19, we are here to bury the `Operation Zaman Lafiya’ and give birth to what we will henceforth call Operation Lafiya Dole.

“Operation Lafiya Dole is derived from the belief that we must end this insecurity. We must restore peace to all parts of the North East and other parts of the country that are affected by insurgency.

“We are going to carry this as a war and I appeal to all and sundry to give this operation maximum cooperation.

“We will carry the civil population along, we wil also observe the principle of human rights and respect human dignity. We will not trample on anybody’s right,” Buratai said.

He expressed optimism that the operation will yield dividends in a very short time. “As the insurgents have refused to understand and come to the right way we must force them to make sure that peace return to all parts of Nigeria,” Buratai said.

NAN reports that the Acting COAS also visited the Shehu of Borno Alhaji Abubakar Ibn Garbai at his palace in Maiduguri.

“I want to assure you that the peace associated with Borno is about to return by the grace of God.

“Borno has of recent been badly affected by the Boko Haram terrorism, I want to assure you that all that is going to be a thing of the past soon,” he told the monarch.

Buratai assured the Shehu that the military will introduce renewed vigour in its anti-insurgency approach in the next few weeks.

“By the grace of God you will start seeing some changes in our operations soon,” he said.

Buratai said that the people of Konduga, displaced by the insurgents, would be allowed to return home in the next one week.

“Government is not happy at the level of displaced persons living in camps.

“The people of Konduga will start going back home in the next one week so that they can start rebuilding their homes,” he said.

Buratai promised to deploy additional troops to provide enough security in the area.

He said that his main goal was to build an army that was professionally sound to perform its constitutional role.

“My goal is to have a professional Nigerian Army that can adequately perform its constitutional role in all ramification.

“I intend to pursue this goal of transforming the army into one of the best in the world,” Buratai said.