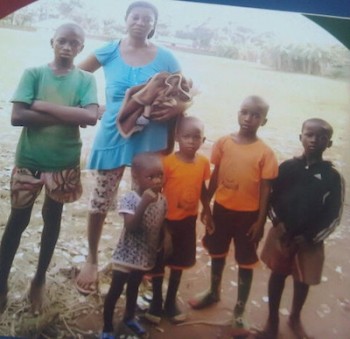 The woman, Chioma Anoruo, has allegedly confessed that she and her husband, Emeka, who is now on the run, have sold more than 19 children to their clients.

Chioma was arrested by the community’s local vigilante led by their chairman, Innocent Anokwute, who later handed her over to the police at SCID.

Five children including a new born baby kidnapped for sale were also rescued.

An SUV belonging to her husband was recovered and an undisclosed large sum of money found on Chioma was also recovered by the vigilante.

P.M.NEWS gathered from the residents the community that there has been frequent disappearnce of children in the area which became of serious concern to the community leaders.

This year alone the community has recorded a number of missing children. On 30 of March this year, Dominion Obasi, a pupil of Ezioha Community School, Okporo was kidnapped in the school premise and since then, he has not been found.

While the community was searching for him, a son of a Deeper Life church pastor was also kidnapped and is still missing.

As if that was not enough, a man called Femi lost his six-year-old son and the boy has not been found since then.

Recently, two sons of the same parents, identified as Chukwuemeka and Chigozie, pupils of Holy Trinity Anglican School, Amazu in Okporo were abducted while returning home from school.

As the abductors were trying to escape with them on their motorcycle, a palm wine tapper who saw the two men, while on top of a palm tree, raised the alarm which attracted the attention of vigilantes who pursued them and apprehended one of the suspects identified as Ebuka.

It was Ebuka’s confession that led to the arrest of Chioma. Ebuka mentioned Chioma and her husband as their sponsors who buy each child from them for N100,000. The couple then sells the children for higher amount to make profit profit.

The vigilantes asked Ebuka to show them where their sponsors reside in the area and he took them to a house belonging to an indigiene who resides in Lagos identified as Nicholas Okeke.

The house served as the couple’s residence as well as where they kept the stolen children before selling them.

According to the vigilantes, when Chioma’s husband, Emeka sighted them, he escaped through the back door while Chioma was caught and forced to open the doors to their apartment where the victims were found inside a room.

During her confession, she revealed that human trafficking was the business she and her husband, Emeka, have been doing for years.

She said her job was to keep the victims while her husband contacted buyers and sold them.

She also confessed that they have sold more than 19 children and the remaining five were yet to be sold before her arrest.

The vigilantes transferred Chioma and the rescued victims to SCID Owerri under a department led by Supol Obi.

When our correspondent visited Okporo in Orlu where the incident happened, the residents confirmed the incident and said the matter has been taken over by the police at SCID Owerri.

The traditional prime minister of Okporo comprising three autonomous communities in Orlu, Chief Victor Udensi, said that there was high crime rate in the communities, including child theft.

He said because of the challenge, they called a security meeting and beefed up security in the area.

He said now the crime rate has reduced because of the drastic actions they have taken over time.

At the time of filing this report, our correspondent was on his way to Owerri , Imo State capital where the suspects are to be paraded by the police.