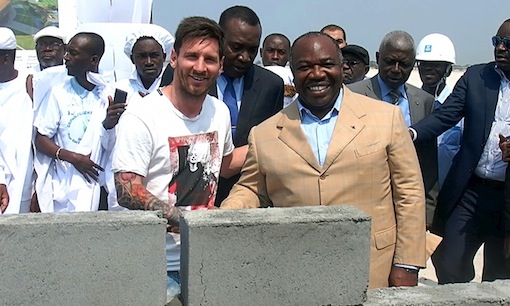 The New York Forum AFRICA (NYFA), the only pan-African business summit to be held in Africa in 2015, is taking place from August 28 to 30 in Libreville, Gabon, to be hosted by His Excellency Ali Bongo Ondimba, President of the Gabonese Republic.

The summit will coincide with the 14th African Growth and Opportunity Act (AGOA) Forum, which is a U.S. government initiative to develop trade and investment relations between Sub-Saharan Africa and the United States.

The NYFA will serve to highlight business and economic opportunities across the whole continent alongside the AGOA discussions about U.S.-Africa trade. This is the first time this Forum has ever been held in Central Africa.

Three of the most lauded former Presidents of the last two decades have been confirmed as speakers at NYFA. These include former Polish President and Nobel Peace Prize-winner Lech Walesa, former Ghanaian President John Kufuor and former Colombian President Andrés Pastrana. Joining them will be Alassane Dramane Ouattara, President of the Ivory Coast, and Michaelle Jean, Secretary-General of La Francophonie and 27th Governor of Canada.

More than 1,500 business and political leaders are expected to attend this year’s NYFA. The theme of the Forum is ‘Invest in the Energy Continent’. It will focus on the new dynamism in the continent, from entrepreneurs and inward investment, as well as the growing energy sector. Key topics include: economic dynamism; energy sector opportunities; entrepreneurship and enterprise; job creation and economic diversification; education and innovation. The NYFA is the only pan-African business summit to be held in Africa in 2015.

Richard Attias, founder of The New York Forum, said: “The New York Forum AFRICA has been since its foundation acting as a catalyst for investments and partnerships in Africa. For this 4th edition, rather than concentrating on oil and gas, the NYFA 2015 will focus on the energy that comes from Africa’s human resources: its women and young people, and the energy provided by innovation and technology in the continent, research and development, and sectors like agriculture and natural resources.”

The summit will host three far-reaching initiatives under the Forum umbrella, covering climate change, job and education opportunities for Africa’s youth, and international law in Africa. In addition to plenary sessions on natural resources, the NYFA will host special breakout sessions from the Climate South Initiative (CSI), focusing on alternative energy, investment, innovation, and green city strategies. In advance of Cop21 in Paris in December, CSI will offer a platform for proactive leaders (private and public sector) from the South to convene to discuss their common future as it relates to the adaptation and mitigation of climate change.

Attias added: “This is the fourth edition of the NYFA and we are delighted to continue to add to the important topics covered within the three days. By broadening our reach, we hope to broaden the impact of the NYFA, through partnerships with public and private sector organisations.”

H.E. Ali Bongo Ondimba, President of the Gabonese Republic, said: “We were delighted to be chosen as the host nation for the 14th AGOA Forum; running the two events together was the natural conclusion. While the falling oil price comes at a time of increasing investment into infrastructure projects, it is vital we maintain the economic diversification programmes we have put in place to reduce our dependence on oil revenues. Increasing trade with the West and continuing to attract investment through high-visibility gatherings such as the AGOA Forum and the NYFA are essential.

“We decided to diversify our economy, thereby our partnerships. This is indispensable in order to create more wealth and more jobs. It is also aligned with our national policy aimed at promoting local processing of raw materials, also consistent with our strategy for sustainable development,” added Ondimba.

The second African Citizens’ Summit, in association with Train My Generation, this year moves to the plenary stage after a successful first Summit last year. The Summit was created to bridge the gap between young educated Africans and the job market – a key challenge that requires collaboration between government, education providers and the private sector. The Summit sessions will be designed in collaboration with young people based on the results of the Train My Generation survey, which was launched by the NYFA 2014.

The NYFA is partnering with the African Association of International Law (AAIL) to host the first-ever forum dedicated to exploring a new international legal framework for Africa. AAIL member Adetola Onayemi explained: “There is a dire need to formulate new legal frameworks that utilise the instrumentality of international law, particularly investment law and international economic law, to increase Africa’s phenomenal average economic growth rate of 5%, deliver development objectives for African people, and accentuate the current attractions of investment within the African industry space.”

The NYFA is composed of vibrant, action-orientated debates and panels, as well as sector-specific breakout sessions and workshops. In addition, the NYFA 2015 will again host the Marketplace, a virtual and traditional meeting-place for participants to book one-on-one meetings with Gabonese stakeholders as well as international corporations, which will increase in size for NYFA 2015.